What Did Democrats Learn from Tuesday’s Spanking? 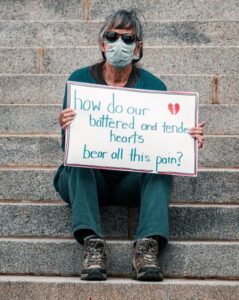 And the news just keeps getting better.

Seems Democrats learned next to nothing from Tuesday’s spanking in Virginia. Turn on any cable news network — except Fox — and pundits on the left are declaring Glenn Youngkin’s victory a win for racism. They can’t stop yapping about white supremacy, culture wars and dog whistles.

“You have to be willing to vocalize that these Republicans are dangerous,” Reid said on MSNBC Live on Election Night. “That this isn’t a party that’s just another political party that disagrees with us on tax policy… at this point, they’re dangerous. They’re dangerous to our national security because stoking that kind of soft white nationalism eventually leads to the hardcore stuff.”

Lieutenant Governor-Elect Winsome Sears — the first black woman elected to statewide office in Virginia, the first immigrant AND a Republican — would like a word with the cable news ignoramus.

“I wish Joy Reid would invite me on her show — let’s see if she’s woman enough to do that — I’d go in a heartbeat and we’d have a real discussion without Joy speaking about me behind my back, if you will,” said Sears during her appearance on Fox’s “The Story with Martha MacCallum” Wednesday afternoon.

“[Reid] talks about white supremacy,” Sears continued. “Does she know that I ran against a white supremacist? I mean. Joy. come on. Get your facts straight and then come talk to me. I’m waiting for you.”

Reid would be wise to duck. This former Marine would leave her begging for mercy.

That well-known intellectual, Alexandria Ocasio- Cortez, actually accused Virginia Democrats of nominating a candidate who was too “moderate” to win. Apparently this New Yorker believes that a radical socialist would have emerged victorious.

Sen. Tim Kaine, who actually occupied the Governor’s Mansion and lives in Virginia, refused to blame McAuliffe or his Trump-centric negative campaign for the loss, instead pointing the finger at Congress.

If only they’d passed the trillions of dollars in “infrastructure” and approved free pre-school, he moaned, McAuliffe might have won.

That is the problem with Democrats. They believe they can buy votes by promising freebies. Like dogs snapping up treats, they believe a sated electorate will roll over and follow the person with the Milk Bones.

What an insult to Virginians.

With a buffoon in the White House, inflation eating into earnings and Virginia’s kids failing standardized tests at an alarming pace because schools were closed by the present governor’s tyrannical orders, Kaine actually believes more swag would have turned this Democratic debacle around.

Only Democratic operative Jim Carville gets it. In an interview on NPR he blamed the left’s “wokeness’ for the loss.

“Well, what went wrong is this stupid wokeness,” said Carville, who was Gov. Bill Clinton’s campaign manager in 1992.

“Don’t just look at Virginia and New Jersey,” he added of the Garden State, where Democratic incumbent Gov. Phil Murphy barely eked out a second term.

“Look at Long Island, look at Buffalo, look at Minneapolis. Even look at Seattle, Wash. I mean, this ‘defund the police’ lunacy, this ‘take Abraham Lincoln’s name off of schools,’ that — people see that,” he continued.

Carville, known as the “Ragin’ Cajun,” said such policies have a “suppressive effect” across the country, and he suggested that progressive Democrats “need to go to a woke detox center.”

Carville… pleaded with them to begin talking “about things that are relevant to people” and “get rid of this left-wing nonsense, this claptrap I hear.”

He’s right of course. (Then again, last week he was defending the tiki torch dirty trick as being a good move.) But I hope Democrats ignore him.

And bring on the mid-terms.

This entry was posted in Culture wars, Politics and tagged Kerry Dougherty. Bookmark the permalink.