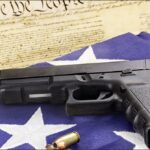 By most accounts, the city’s gun buyback event on August 20th was a success. The city spent $67,500 in gift cards to 160 people who turned in 475 firearms, and then had to shut down even though there were more people in line.

Organizers with the Robby Poblete Foundation said they are not against the Second Amendment. “We are against senseless gun violence,” said Pati Navalta, executive director of the foundation. “We are for gun safety.”

Glenwood Burley, a retired Richmond police officer, said the line of cars was “unexpected” and considered the event a big win.

“Any gun that you can get out of someone’s bedroom, that someone may break-in and take somebody’s life with it next week, this is a win for everyone in the city,” Burley said.

Opinions vary widely on the effectiveness of such events from being a media stunt to every little bit helps, and research remains unclear whether such events have real effects on reducing gun violence.
Virginia Public Media interviewed Dr. Will Pelfrey, a professor at the Wilder School of Government and Public Affairs at VCU, who said, “The people who are gonna bring those guns [to a buyback event] … are unlikely to be the people who are considering using those guns in a violent crime. Criminals are unlikely to show [up] to an event where there are probably police.”

The article cited 152 people who turned in weapons during the weekend for various reasons. Eighty people did not provide a reason.

Pelfrey was surprised that the form provided by the city to participants this weekend included a signature line. “Anonymity is important in this because you want to draw people who are not otherwise going to relinquish guns,” Pelfrey said. The professor, though, isn’t averse to gun buybacks. “Even though I think that they’re unlikely to make much difference, it can’t hurt,” Pelfrey said.

It is safe to say that the Richmond Free-Press is not a fan or impressed by the “overwhelming success” of the buyback program. The newspaper is skeptical that it will have an impact on violence or gun ownership, and said it “did not even make a ripple in gun ownership in Richmond.” Cirting the Census and other data sources, it estimates that there are more than 100,000 weapons in the City in private hands.

And that doesn’t count the illegal weapons. As one observer put it, “It was like scooping a cup of sand from the beach and suggesting that no more sandcastles could be built.”

The article lays out the numbers along with a teaspoon of skepticism: “The city reported that the weapons included 126 that were broken and inoperable, representing 26 percent of the total. The other firearms included five assault rifles, 227 handguns and 117 rifles and shotguns. Observers noted most of the guns are not the kind of firearms that show up at crime scenes.”

So, the buyback was a success that removed some guns from possible circulation. What must come next is the hard and serious work of reducing crime in neighborhoods, getting (and keeping) guns out of bad people’s hands, and rebuilding trust with the community — all of that has to start at the top. We’ll see if our leaders focus on doing that hard work as much as they do the easy, media- friendly stuff that makes a splash and easy media copy.

Jon Baliles is a former Richmond City Councilman. This column has been republished with permission from RVA 5X5.

This entry was posted in Gun rights and tagged Jon Baliles. Bookmark the permalink.