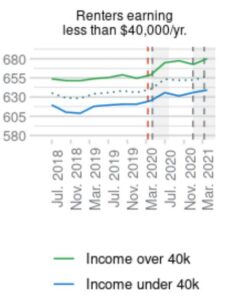 Who would have guessed? For all the angst over the “eviction crisis” precipitated by COVID-19-related job losses, it turns out that the financial condition of low-income renters improved overall as the epidemic wore on, according to a new report by the Consumer Financial Protection Bureau (CFPB). The federal bureau credits stimulus payments, stepped up unemployment insurance benefits, and the suspension of college loan repayments for the change.

Virginia advocates of tenant rights used the eviction crisis as justification for the partial moratorium on evictions through June 2022. (Before evicting tenants for unpaid rent, landlords need to give tenants 45 days to get rental assistance approved.) At one level, the crisis appeared to be very real. The Virginia Unemployment Commission fell far behind in processing unemployment benefits to workers who lost their jobs, which seemed a plausible explanation for why so many were falling behind on their rent payments.

Administrative failures may be responsible for Virginia’s eviction crisis, but the CFPB report suggests that the story is more complicated than commonly portrayed.

True to the common perception, renters were more likely than homeowners to lose their jobs during the pandemic-related economic shutdowns. In June 2020, 22% of renters with a credit record were unemployed compared to 12% for homeowners, the CFPB found. By June 2021, 16% of renters told the U.S. Census Bureau that their households were not current on their rent payments, and renters collectively owed an estimated $29.7 billion in back rent.

Renters fell behind despite a gusher in federal aid. States the report:

Credit scores among renters with student debt leapt during the first months of the pandemic after the CARES Act paused federal student loan payments. Delinquency among renters with children saw a considerable decline following stimulus payments, which were larger for households with children. … During the pandemic, renters were also more likely to face a period of unemployment, and so more were likely to be recipients of extended unemployment benefits.”

Despite adverse labor market conditions, renters’ financial circumstances appeared, on average, to improve as much as or more than those of homeowners. Renters’ credit scores grew by 16 points during the pandemic, compared to 10 points for mortgagors and seven points for other homeowners.

While the federal government may be been pumping out cash like water through a firehose, press reports indicate that overwhelmed state unemployment agencies had trouble shipping out the dollars fast enough. The failure was especially acute in Virginia. I have long attributed the eviction crisis to this administrative failure. (Conversely, Virginia has done an excellent job in dispensing cash renter assistance, but the volume of dollars was significantly smaller.)

The CPFB report raises new questions about what is happening. Low-income renter finances have been improving despite the fact that the processing of unemployment checks has been slow. And the number of renters falling behind on their payments has surged despite the fact that low-income renter finances overall have been improving.

I offer two conjectures to explain the discrepancy.

First, it is possible that a sub-set of renters have fallen behind even as overall credit scores for low-income renters have improved. Perhaps the federal aid geyser was not distributed evenly.

Second, it is possible that some renters figured out they could game the system. We live in an entitlement society, and a lot of people feel they are “owed” something. Given all the talk about rent moratoria and the anti-landlord rhetoric that was pervasive in some communities, perhaps some people took the federal aid but calculated they could skip their rental payments without consequence.

The second conjecture is out of bounds in polite discussion. Suggesting that thousands of poor people were cheating their landlords would be tarred as “blaming the victim.” It is a possibility that academics, journalists and government officials simply will not explore. That doesn’t make it false. On the other hand, my conjecture doesn’t make it true.

I don’t know the answer. But the discrepancy between surging eviction cases and rising credit scores does call out for explanation.

This entry was posted in Housing, Poverty & income gap and tagged COVID-19, James A. Bacon. Bookmark the permalink.