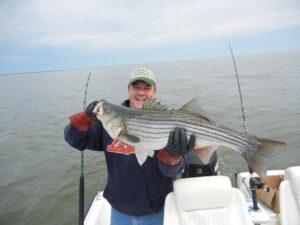 Between a rock(fish) and a hard place.  Striped bass, locally known as rockfish, migrate up the coast of the Atlantic each spring to spawn. The biggest rockfish come into the Chesapeake Bay to mate and then leave the Bay to resume their trip north. Other smaller rockfish remain in the Bay. The period of time when the big oceanic rockfish come into the Bay is known to fishermen as the Spring Trophy Season. Regulations are strict but anglers flock to the Bay in the hope of landing a big striped bass. The trophy season starts after the spawn and runs from May 1 to June 15 in Virginia. At least, that’s usually the plan. Unfortunately, a recently completed fish assessment has shown a precipitous drop in rockfish. Scientists blame this on overfishing and are considering asking the Virginia Marine Resources Commission to ban fishing during this year’s trophy season. This is a startling development given the seemingly good news about the Bay in general and rockfish in particular over recent years.

Where have all the rockfish gone? The Atlantic Striped Bass Management Board performs an annual assessment of the rockfish fishery. Particular attention is paid to female rockfish of spawning age. Each year an estimate is developed of the total weight of spawning-sized females. The threshold for the estimate is 202 million pounds. This year’s estimate is 151 million pounds, indicating an overfished situation. The proposed ban will be decided at the commission meeting of April 23 with an effective date of April 29. If the decision  to ban is taken, Virginia’s 2019 Spring trophy season will be shuttered. The Atlantic States Marine Fisheries Commission believes that recreational fishing accounted for 90% of the total striped bass catch in 2017. Therefore, banning recreational fishing this spring would be expected to have a significant impact on the fishery.

Maryland intransigence. Virginia seems to be taking the overfished situation seriously. Maryland … not so much. Maryland’s trophy rockfish season starts April 20 and lasts through May 15. The Sportfishing Advisory Board of the Maryland Department of Natural Resources will meet once more before the planned opening of Maryland’s trophy season. However, agency sources say they don’t have any current plans to change the trophy season. Given that the largest percentage of striped bass caught on the Atlantic Coast are caught in Maryland, the stubbornness of Maryland’s DNR could have major implications for the fishery.

Blaming technology. Recreational striped bass fishing in the Chesapeake Bay has undergone a technological revolution of late. Ten years ago a typical privately owned boat would troll two lines in search of trophy rockfish. Then came a flurry of outriggers allowing those same boats to troll four to six lines. More recently, planer boards have appeared on almost every boat operating during trophy season allowing up to 20 lines to be trolled at a time. Many believe that the increased lethality of recreational fishing boats has been to blame for the overfishing of rockfish. One alternative to an outright ban could be a limit to the number of lines that can be trolled from a single boat.

13 responses to “Virginia Trophy Rockfish Season under Threat of Cancellation”