Wind turbines off the Danish coast.

If the State Corporation Commission holds a hearing and Bacon’s Rebellion is not there to cover it, does it make news?  Well it turns out there is a transcript.

Having first held a hearing to debate whether it had the authority to reject a two-turbine, $300 million off-shore wind “demonstration” facility blessed by the General Assembly, the SCC turned to the project details in three days of hearings October 9-11.  A flurry of additional written testimony and exhibits have also been added to the record, even though no participant in the discussion is arguing the SCC should say no.

With the remnants of Hurricane Michael bearing down on Virginia, but not from the direction of the Atlantic Coast, Dominion Virginia Energy bolstered its arguments that what it will learn from this project is worth the cost of the electricity to ratepayers – about 77 cents per kilowatt hour — which on its face is more than 10 times the cost of power from the Vineyard Wind project going forward off Massachusetts.  Some new information on cost comparisons is now on the record.

“I mean, I wouldn’t spend my money if that’s what you’re asking. I would not,” replied Scott Norwood, who testifies often and is usually a watchdog on behalf of consumers.

It was as a demonstration project that the 2018 General Assembly deemed the project as being in the public interest, a tiny piece of its giant regulation package.  The 12-megawatt project is a precursor to a larger wind field, perhaps as vast as 2,000 megawatts, planned for the same location.  An exhibit cited the utility’s current integrated resource plan estimate that power coming from the big project will cost about 13 cents per kilowatt hour.

“Staff’s concerns set out in the prefiled testimony and in my opening statement have not been diminished during the hearing,” said SCC staff attorney Kiva Pierce in closing. “This is a risky project made riskier by a design change, and ratepayers bear almost all of the risk.  And as has been noted now multiple times, prudency is all about risk. While there is a warranty, it is a limited warranty, and it does not cover waves or category three hurricane conditions.

“If the Company does not wait and gather data from the project before making a decision on a larger-scale generation project, then in Staff’s mind it is questionable if this is a demonstration project,” Pierce said.  Given the maturity of offshore wind technology world wide, there isn’t much more to demonstrate beyond seeing what happens when a hurricane shows up, which may never happen.

The SCC staff and the Attorney General’s Office are arguing for some restraints on the project, including a cap on the cost.  But they are not asking the Commission to spike it entirely.   Even so, a Dominion Energy lawyer tried to impeach Attorney General’s witness Norwood by introducing a news article from 2015 in which Attorney General Mark Herring heaped praise on an earlier and more expensive version of this project.

“I’ll object,” said Assistant Attorney General Meade Browder. “Your Honor. This statement is from sometime in 2015. We’re here now in 2018. Mr. Burton and I are not here doing our own thing solo. We’re here on behalf of the office who is led by Attorney General Mark Herring. I don’t believe it’s an appropriate question.”  The objection was sustained, but the point was made – the politicians including their boss bought into this early with no thought to the consumer cost.

Details of the cost remain murky, because at Dominion’s request much information remains confidential.  The full cost of the 27-mile transmission line is not being shared, for example.  The record is replete with redaction.

“So we’ve communicated what the total project cost is, but the details of the project cost, you know, it’s an extremely competitive business both overseas and especially as it comes into the US,” said Dominion vice president of generation construction Mark Mitchell.   “There are many RFPs such as the one that was recently conducted in Massachusetts, so vendors are very, very protective of disclosing exactly what their numbers are because of the competitive nature that’s going on in the US.” 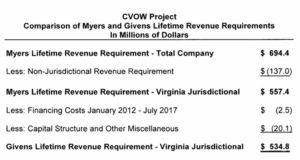 An SCC accountant estimated the 25-year all-in (including finance costs and profit) revenue requirement for the project at $694 million, which would be highly relevant if this were funded the same way as other new generation and which may still be what Dominion charges its customers over time.  All of the accounting will be decided in a future case looking back at costs.

That $694 million is for the entire system, Dominion countered.  The cost to the “jurisdictional” customers covered by SCC regulation, who use 80 percent of its load, comes to only $535 million.  Apparently, the SCC is supposed to disregard the $137 million cost to non-jurisdictional customers (including Virginia state and local governments and the federal government, all using taxpayer dollars to buy power.)

As the case goes on, the record is filling up with testimonials from politicians and business groups, most of them arguing that this project will make Virginia the center of a burgeoning offshore wind industry on the Atlantic coast.  That drew some skepticism from Chairman Christie, as well.

The possible larger project creates an entirely different economic scenario, with far better economies of scale, and if Dominion proceeds the argument over it will include whether all the power is needed as demand flattens.   But a review of this hearing record and the pile of new documents does not dissuade me from my earlier opinion that this little boondoggle is unreasonable, imprudent, and only demonstrates the disasters that ensue when the political class disregards the consumers and overrides the autonomy of the SCC.