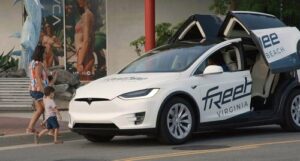 In its never-ending quest to meddle in the free market, the City of Virginia Beach on Wednesday will launch a gimmicky free ride-sharing service at the oceanfront, guaranteed to hurt local Uber, Lyft and taxi drivers.

But who cares about those scrambling to make some scratch in the gig economy, am I right? Learn to code, losers.

Yep, the city that couldn’t reduce the real estate tax rate when the country is teetering on the brink of a recession was able to find half a million dollars to join “Freebee,” a national ride-sharing service accessible by an app.

No, I won’t share the address with you. Look it up.

A fleet of five Tesla Model X SUVs are about to hit the road, taking passengers from 42nd Street (the doorstep of The Cavalier Hotel, a coincidence, I’m sure) as far south as General Booth Boulevard and west to Birdneck Road. In other words, the entire resort area and Vibe District.

These aren’t ordinary Teslas, either. They’re bat-wing style luxury cars with a starting sale price of about $126,000. They seat seven passengers and the ride is shared with strangers. Like a bus, but quieter.

Granted, five cars subsidized by the city and competing with fee-charging services won’t put other drivers out of business in the summer, but it will ding their ability to make money. Especially on slow days. And this program is year-round, so it’ll kill the gig economy in the winter.

From the city’s webpage:

As part of the City’s Resort Area Mobility Plan (RAMP) which calls for enhanced shared mobility services in the resort area, the City is funding the Freebee microtransit service for a one-year pilot program to gauge its usage.

Freebee provides convenient and FREE door-to-door, on-demand public transportation for residents and visitors throughout the resort area in all-electric Tesla Model X vehicles. The vehicles operate seven days a week, from 11 a.m. to 11 p.m. and are available to everyone.

Our woke city also brags about how the service will promote “clean energy” and “reduced carbon emissions.”

Mensa membership has never been a prerequisite for city leadership. Anyone want to tell them where electricity comes from?

It’s never a good thing when government decides to jump into the free market, whether by giving handouts to favorite developers or offering free ride-sharing.

In other cities, the municipality pays a nominal fee and the cars are sponsored by local businesses that slap their ads on the exteriors. Not here. Our magnanimous city government is letting taxpayers pick up the entire tab.

And, no, it doesn’t matter which fund is used for the service. It’s all public money.

What’s next? A free city-sponsored seafood restaurant where tourists can sample the bounty of our local waters without paying for their entrees or that usurious Virginia Beach meals tax? How about a taxpayer-subsidized-hotel where guests can stay free of charge in five-star luxury?

Sorry. Didn’t mean to give local geniuses any more ideas.

This entry was posted in Transportation and tagged Kerry Dougherty. Bookmark the permalink.