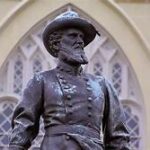 Perhaps you’ve noticed the discussion over the past year about the banishment… er, sorry, removal… of Stonewall Jackson’s statue from the Virginia Military Institute’s Main Post. Well, here’s another contribution. I will make the case that the powers-that-be behind the excision of Jackson’s memory from VMI weren’t trying to help the institute. They wanted to humiliate it.

The Barnes and Thornburgh analysts who studied the racial climate at VMI noted that many people attend VMI because they want a military experience.  Men and women who enroll at the academy are a lot like cadets or midshipmen at West Point, Annapolis, the Air Force Academy, the Citadel and Norwich.

Military schools, and military men and women, honor leaders who showed courage, determination and excellence in battle. Military schools are normally proud of the great generals and admirals they produced.

Non-woke historians universally accept Stonewall Jackson as one of America’s greatest battlefield generals. His Valley Campaign of 1862 was “as remarkable a campaign as the Civil War produced,” wrote Civil War historian Bruce Catton. S.C. Gwynne, a former bureau chief and editor at Time, wrote “Rebel Yell,” a biography of Jackson in 2014. The book’s cover said that in the Valley Campaign, Jackson had “engineered perhaps the greatest military campaign in American history,” and had become “one of the most famous men in the Western world.”

“According to the military textbooks,” said Catton in his centennial history of the Civil War, “no general should ever divide his forces in the presence of the enemy. This is a very sound rule in most cases, but it is a rule that was made to be broken now and then, and [Robert E.] Lee was the man to break it.” Twice, at Second Manassas and Chancellorsville, Lee divided his Army of Northern Virginia in the face of larger Union armies. Both times, Stonewall Jackson led the Confederates who flanked and surprised the Federal forces.

“Jackson’s strategic innovations shattered the conventional wisdom of how war was waged,” says the cover of Rebel Yell. “He was so far ahead of his time that his techniques would be studied generations in the future.” Lee could break the rules of war, and get away with it, because he had Stonewall Jackson.

In the midst of the George Floyd hysteria, activists focused much of their ire with VMI on Jackson’s statue and his admittedly larger-than-life presence on the campus. VMI’s Board of Visitors panicked after the bombshell Washington Post allegations of widespread racial insensitivity and intolerance. The Board’s first choice for a defense mechanism: offer up Jackson’s statue as a sacrifice. BOV members didn’t stand up for Stonewall; they threw him to the wolves.

Observers at West Point, at Annapolis — and also at Sandhurst (the British Army’s military academy) and St. Cyr (France’s most famous military college) — are probably puzzled by the activists’ laser-like focus on Jackson. He was not a plantation owner, much less a Simon Legree. To the contrary, the historical record shows that he treated his slaves well. He created and ran a Sunday School for slaves.

“From what evidence we have, Jackson was well-liked by blacks” in Lexington, writes Gwynne. Jackson even risked his community’s anger over the school. When three local lawyers threatened legal action against him for it, Jackson angrily challenged the men’s Christianity. The school stayed open for thirty more years. Those are the actions of an honorable man. (Exactly the kind of men and women VMI is supposed to produce).

VMI is littered with monuments to Confederates, most of whom are unknown to anyone but VMI alumni or Civil War enthusiasts. If VMI Main Post was “too Confederate,” as the activists claim, then remove those monuments. But, from day one of this affair, the activists have focused on Stonewall. This past spring, the VMI superintendent recommended and the BOV approved erasing almost every remaining tangible sign of Stonewall’s legacy from Main Post.

VMI has chosen to prioritize inclusion over greatness. Jackson was a quirky, and obviously flawed man. But, on the battlefield and in his community, he achieved greatness. At West Point, and Annapolis, and Norwich, and the Citadel, and Sandhurst and St. Cyr, they know that. They see the legacy of VMI’s, and one of America’s, greatest battlefield generals under assault by a crowd of activists — an assault cheered on by culture warriors who are wounded by trigger words and retreats to safe spaces.

Faculty at the European military academies must be shaking their heads in disgust at the spectacle. At Frunze, the Russian military academy, and Nanjing, the PRC’s, they’re undoubtedly laughing.

Perhaps that’s what the activists wanted all along — not to extinguish modern-day traces of racism but to humiliate an institution that openly celebrates patriotism, the martial virtues and the ideal of the citizen-soldier that made America the great nation it is today. One way to humble a community — or a corps — is to take away its heroes. The obsession with Jackson makes no sense to me otherwise.