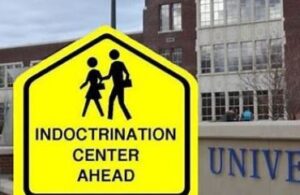 The indoctrinal push to impose Critical Race Theory across American society is centered in the verb phrase to have to. Its primary meaning states a requirement, but it is a requirement that also connotes a threat for failure to comply. In every training and in every managed discussion of DEI at the Northern Virginia Community College (NOVA) that I have to attend, the arguments used to “persuade” me have been prefaced by this troublesome helping verb.

I hear “you have to see that” and “you have to understand” and “you have to look at it this way” in every part of the structure of this vast toulminian hornswoggle known as CRT. Yes, it is true that if I see it your way, then I will agree with you. But it does not follow that because you think you are right, that I have to see it your way, or consequently, that you have the right to force to do so. This is an irrational claim, a fallacy at the core of CRT “reasoning.”

Further, this belief that I have to think, or see, your idea your way gives rise to a set of false deductions that end in conflict, rather than consensus. See, you who think I have to think about CRT and DEI a certain way fail, firstly, to declare your full logical claim. What you mean is I have to see it your way for it to be true because the only way CRT can be true is if everyone says it is true, for it is not logically true (as I am demonstrating here).

But the fact is, I don’t have to see things your way; in fact, quite the opposite is true. Because I’m looking at these claims from a rational, rather than irrational framework, I have to see it as my reason dictates, not yours.

Further, this belief that I have to think, or see, your idea your way for it to be true illustrates the irrational and unscientific reasoning employed in CRT. Any claim of truth about the natural world that requires absolute fidelity to only one static condition or point of view, simply cannot be an accurate representation, and is therefore not true because it is inherently incomplete. It fails to account for all knowledge and experience in the phenomenon known as “racism.” In fact, the processes of scientific knowledge production deliberately disenfranchise claims prefaced with phrases like “you have to see it this way”; science deliberately says, “no I don’t.”

So, if we take the full claim of you have to think this way for it to be true, then you who say this believe that anyone who disagrees with you must not be thinking the way they have to, and therefore you can force them to do so. That’s the next false deduction from the specious claim. In this deduction you contradict the very premise of our society that you claim to serve, for according to you, I have to see things your way, but you do not have to see things my way. Thus, in your thinking, we are not equal, for you implicitly believe my view must be subordinate to yours, and you have the right to make me have to do whatever you want.

And this inconsistency in reasoning, the lack of equal parts in the CRT equation, is also why it is rationally not true. For true and accurate consensus to exist among human beings, then all individual human minds must be equal in that conversation. In CRT and DEI constructions, human beings are no longer equal, and that is why these ideas will ultimately lead to open conflict and civil war. And so, we have arrived at the very same question of human nature that dominated American society in 1860.

Dr Schuhart is a Professor of English at NVCC-Annandale. He holds a Doctorate in Education. His area of specialization is Scientific Rhetoric; he teaches both Scientific Writing and American Literature, among other things.

This entry was posted in Culture wars and tagged Dr A Schuhart. Bookmark the permalink.