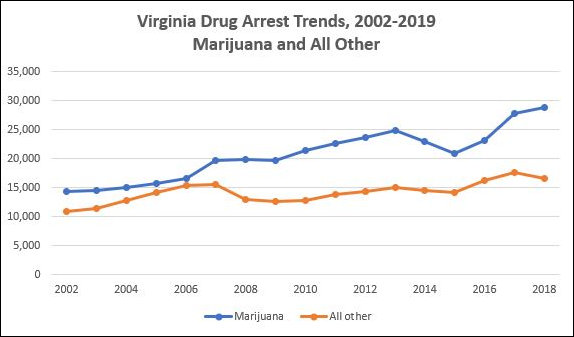 Based on data from the latest Virginia State Police “Crime in Virginia” report, Attorney General Mark R. Herring recently noted that Virginia arrests for marijuana-related charges increased 3.5% in 2018, capping off a tripling of marijuana-related arrests since 2002.

“While other states are moving to a more sensible approach to cannabis, Virginia is still moving in the wrong direction. It makes absolutely no sense,”Herring said in a press release. “Marijuana arrests are now at their highest level in at least two decades and maybe ever, meaning that even more Virginians, especially young people and people of color, are being saddled with criminal records that can drastically affect their lives. Now is the time to put a stop to this costly, unfair, and ineffective approach, and to pursue a better, smarter, fairer course.”

Yesterday I promised to take a closer look at the crime data to see if Herring’s representation of the marijuana-related arrest trends is fair. As far as I can tell, it is. But the conclusions he draws may not be.

The graph above compares two trend lines: arrests for marijuana-related charges and arrests for all other drug-related charges. The data shows a steady climb in marijuana arrests, interrupted by a brief decline in 2014 and 2015, and then a sharp rebound, reaching a record 28,866 arrests in 2018.

While marijuana arrests more than doubled, increasing 101% over the 16-year period, arrests for all other drugs climbed only 52%.

Remarkably, the surge in marijuana arrests in the past three years coincides with increasing sentiment among the public, the political class and even law enforcement that marijuana use should be decriminalized. I am at a loss to explain the discrepancy between the increasing public tolerance of marijuana with the higher arrest rate — the gap is something that needs to be explained.

I looked for clues in the arrest trends for other drugs, including cocaine, crack cocaine, heroin and amphetamines. 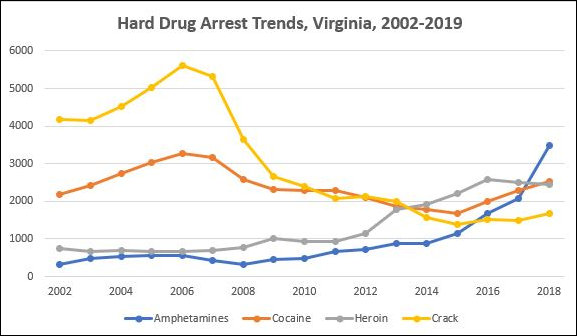 One highly positive trend is the dramatic fall-off in crack-related arrests since 2006. Cocaine-related arrests also have declined since then as well, although there has been a rebound in the past three years.

I would conjecture that the arrest trends in these four drugs mirrors the incidence of usage and trafficking. Similarly, one might hypothesize that the long-term climb in marijuana-related arrests likewise matches an increase in usage and trafficking. Consistent with this interpretation is a study cited in Newsweek  that found that 12.9 percent of adults had used marijuana in 2015, up from the 6.7 percent a decade previously.

As for the conclusions Herring draws from the arrest data… The AG contends that “more Virginians, especially young people and people of color, are being saddled with criminal records that can drastically affect their lives.” I don’t see how that statement is supported by the state police crime reports.

The state police reports do not tell us how many of those arrested for marijuana possession were charged, or convicted, or jailed/imprisoned. Police may be making more arrests for marijuana-related offenses, but that doesn’t mean prosecutors are pressing charges or that judges are sending people to jail. To determine if Virginians “are being saddled with criminal records,” or that their lives are otherwise affected, we need to review the data for prosecutions, convictions, and imprisonment. I don’t know if anyone compiles those numbers. If some alert readers knows where I can find that data, please let me know.

This entry was posted in Crime , corrections and law enforcement and tagged James A. Bacon, marijuana. Bookmark the permalink.