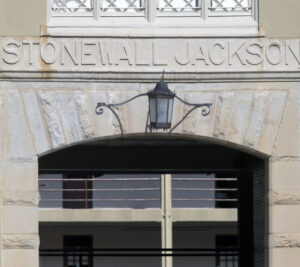 The Jackson Arch — before sandblasting

The Virginia Military Institute’s hands were tied, it seems. It tried for months to justify leaving an inscription of Stonewall Jackson’s name on an arch at the Old Barracks on VMI’s Main Post. But the school’s leadership couldn’t find a way, so it chose… to take a sandblaster to the  National Historic Landmark.

That’s the conclusion I draw from VMI’s explanation of its decision to expunge Stonewall Jackson’s name from the formerly named Jackson Arch. (See “Retained and Contextualized At VMI” for the full explanation.)

According to the chair of VMI’s Commemorations and Memorials Naming and Review Committee (CMNRC), the original intent of installing a statue of Thomas Jonathan Jackson on the Main Post and inscribing his name on the Post chapel and upon the arch was to honor “Stonewall” Jackson, the brilliant Confederate general. However, only “most compelling” reasons would allow his name to  remain on Jackson Arch today. “The Committee spent months analyzing reasons that might allow the continued display of the Jackson tributes,” said the committee chair, but could not find sufficient justification.

I think Lucky Ned Pepper, the villain in the movie True Grit said it best: “Too thin!”

In the movie, the hero, Rooster Cogburn, is tracking Pepper’s gang through Indian Territory on behalf of Mattie Chaney, a young woman whose father was murdered by a gang member. The gang captures Mattie, and Pepper confronts Rooster, holding young Mattie at gunpoint. Rooster offers Pepper a deal: release Mattie, and he would end the chase. Seeing that Rooster is offering him a weak deal, he replies, “Too thin, Rooster!”

VMI’s justification for why it had to sandblast a National Historic Landmark is too thin. Apparently, VMI determined that Stonewall Jackson’s legacy ultimately is defined by two things: he served the Confederacy, and he owned slaves. Those two facts functioned like a breaker switch, which, when flipped shut, rendered everything else immaterial. That “everything else” includes:

His battlefield excellence. To this day, Stonewall Jackson remains one of the American military’s greatest field commanders. His exploits remain some of the best examples of how to outmaneuver an enemy force and defeat it in detail (i.e., attack its separate parts individually, instead of the whole force at one time).

His exceptional citizenship. VMI’s mission is to create great citizen-soldiers. As a VMI professor, Jackson ran a Sunday School for slaves at a time when it was illegal to teach slaves to read in Virginia. Though confronted on the streets of Lexington and threatened with legal action, he refused to back down! (Nowadays, people back down when faced with mean Tweets!)

His devotion to VMI. An eccentric, Jackson often was a figure of fun in his own classroom. But he was devoted to the Institute. Even after his Civil War exploits made him famous, he expressed a desire to return to VMI after the war. One of his most famous quotes, uttered just before he attacked at Chancellorsville, shows how important VMI was to him: “The Institute will be heard from today.”

By the 2021-2022 Christmas break, when VMI summoned the sandblasters to Main Post, much had changed from the tumultuous days of the fall of 2020. Jackson’s statue was long gone, exiled to New Market. The general’s name had been removed from the Post chapel. VMI officials bent over backwards to refer to him as “Major” Jackson in public, and cast him mostly as an unpopular physics professor. Any smothering aura of “Stonewall” was long gone. The Barnes and Thornburg report on alleged systemic racism at VMI showed that strong majorities of cadets and alumni thought that removing Jackson’s statue had been a mistake. Many feared it was an overreaction, which made the Institute look silly and hypersensitive. (Which is NOT a good look for a “West Point of the South.”) And, in November 2020, the progressive zealots in the Northam administration and the General Assembly who’d been hounding VMI had been sent packing at the polls. VMI had plenty of justification to rethink Jackson Arch’s fate.

The CMNRC said it couldn’t find “compelling reasons” for leaving the arch alone. But, shouldn’t you have compelling reasons before you take a sandblaster to a National Historic Landmark? Couldn’t VMI instead have installed a contextualizing plaque next to the arch? The questions answer themselves.

VMI’s defenders may point to its support of the Stonewall Jackson House in Lexington, and the prominent place Moses Ezekiel’s statue of Jackson now occupies at New Market. Fair enough. But those of us who’ve watched “True Grit” had also seen Fiddler on the Roof. At the beginning of the play, the citizens of Anatevka ask the rabbi if there’s a proper prayer for the Tsar. Of course, said the rabbi: “May God protect and keep the Tsar—far away from us.”

No one thinks the rabbi was complimenting the Tsar, and everyone knows that VMI sent Jackson’s statue as far away from Main Post as possible.

If VMI tells us now that, in December of 2021, after everything that had happened in the Stonewall Jackson episode by then, it was still necessary to erase the general’s name from Jackson Arch, that it was compelled to “Call Out The Sandblasters,” we should take them at their word… and then draw our own conclusions as to whether the Institute demonstrated high-quality judgement, grounded on compelling reasons, or not.

I suspect many people will come to the same conclusion Lucky Ned Pepper did.