To Get Respect, Show Respect 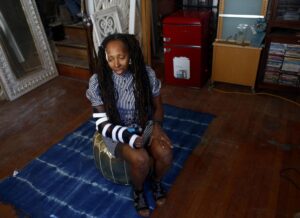 There are frequent posts on this blog citing the low morale of police officers and officers quitting or retiring as a result. (For one example, see the post from earlier today.) However, for some reason, those posts often fail to report on the continued bad behavior of police.

Early last month, a 45-year old Black woman encountered two white police officers questioning a woman who appeared to be homeless near the Sauer Center in Richmond. (In order to keep the people involved in this incident straight in my narrative, I will refer to the woman being questioned as homeless, although it is not certain that was her status.) The subsequent actions were recorded by the Black woman involved and another eyewitness who started recording after she heard the first woman pleading for help.

The video from the second eyewitness shows two officers holding the woman on the pavement and five additional officers showing up. The second video records the woman as protesting, “Please help me… I’m hurting. You dragged me to the ground and beat me up.” One of the officers replies, “No, you did that to yourself.”

In a statement to the Richmond Times-Dispatch, the Richmond Police Department said the woman was arrested for trespassing and obstruction of justice. “As a result of her actions, she sustained a minor injury,” and was taken to the hospital for treatment before going to jail, the spokesman said  Medical records the woman shared with the RTD show that the “minor injuries” consisted of a possible broken elbow, as well as cuts and bruises on her head, arms, and legs.

The woman claims that, upon obtaining her address after she was arrested, “They said I had no business there if I live near Gilpin Court.” (For those readers not familiar with Richmond, Gilpin Court is one of the public housing projects and the incident occurred in the Sauer Center, in which a Whole Foods market is located. Draw your own conclusions.)

At a court hearing earlier this week, one of the officers involved was absent due to illness. Nevertheless the judge refused to grant the prosecution’s request for a continuance. Subsequently, the Commonwealth’s Attorney’s office dropped all charges.

This relatively minor incident and the manner in which it was handled raises a lot of questions and issues.