The “Missing Middle”: Is it an Answer to the Affordable Housing Problem?

Older houses in the Lyon Park neighborhood in Arlington. When these houses come on the market, they will likely be replaced with a much larger house like the one below.  Whether other types of housing should be allowed is being hotly contested in Arlington.  Photo credits: top: Advon Group; bottom: DC Metro Neighborhoods 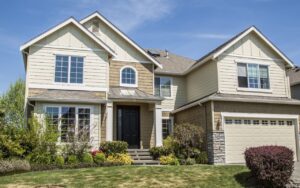 Three years ago, in one of his periodic pleas for more flexibility in zoning laws to enable more affordable housing, Jim Bacon discussed “missing middle” housing and noted that Arlington County was beginning to consider how to address that idea. Arlington released its study late last year and the concept and recommendations have been a major source of controversy this year.

I ran across the term “missing middle” and the controversy in Arlington recently in an article in the Washington Monthly. The author, Gabby Birenbaum, is a native of Arlington. She describes her childhood growing up in the Lyon Park neighborhood in the early 2000’s with great fondness. “I absolutely loved the place.” It was a place “that everything I could desire was a walk or a short bike ride away.” She then describes significant changes in the last few years in which “growth has gone completely gangbusters.” The result has been, as the title of the article laments, “I can’t afford to live where I grew up.”

Her diagnosis of the reason for this state of affairs is the same that Jim Bacon has been preaching: “We’ve outlawed density.” This has been accomplished through the use of exclusionary zoning, which “has limited where and what kinds of housing can be built and artificially restricted new density in the majority of neighborhoods.” She asserts that exclusionary zoning was first used to maintain segregation and has now morphed into legally enforceable class-based discrimination. She points out, “In areas zoned for single families, the only type of housing stock permitted is detached homes, a limitation that suppresses density and diversity.”

This is where the “missing middle” comes in. The term refers to types of housing that fall between single family detached homes and multi-story apartment buildings. The Arlington Missing Middle report recommended amending the zoning ordinance to allow the following housing types in areas now restricted to detached single-family houses: duplexes, triplexes, and other multiplexes up to eight units, as well as townhouses. The same standards that apply to single-family units regarding height, setbacks, and lot coverage would be applicable to the “missing middle” structures. Furthermore, townhomes would be limited to groups of three. (Arlington County has a portion of its website dedicated to the missing middle study. It is located here; on it can be found the original report, one-page summaries, summaries of comments at public meetings, and other documents.)

The blowback has been furious. As Birenbaum colorfully put it, “the NIMBYs went berserk.” In Phase 2 of the process, begun last summer, the county sent out surveys to all residents seeking feedback, and also conducted numerous community meetings to explain the study and recommendations, as well as to get comments from residents. At a county board meeting, local media reported, “Emotions ran so high as to elicit boos and shouts for speakers like Harrell [a supporter of the recommendations] and for County Board Chair Katie Cristol, when she cut off another speaker for violating the ‘one speaker per topic’ rule.” Although the population is majority-renter, 845 of the survey respondents were homeowners and 755 of them wanted the plan to be significantly narrower.

There were substantive criticisms that went beyond the NIMBY mindset. The county summary itself projected a modest effect: 20 lots per year becoming “missing middle” and an increase in the county population of 1,500 over ten years attributable to “missing middle” housing. Results like that would not put much of a dent in the housing scarcity in the county.

One of the beneficiaries of more “middle housing” put forth by the county was “public servants in search of mid-scale homes, such as teachers, police officers, and firefighters.” It would likely be a stretch for many “public servants” to afford housing at these prices, especially in a family with two or more children. One supporter of more affordable housing lamented to the Post, “The county appears to have walked away from any discussion about affordability. I do not see how the missing middle framework as planned is going to bring down prices.”

The proposed “missing middle” plan was a major topic in this year’s race for election to a seat on the Arlington Board of Supervisors. (Arlington has a different electoral system than other counties. Each of the five members is elected at large and the terms are staggered so that one or two seats come up each year.) Some were viewing the election to fill the seat as a “proxy” vote on the plan. The Republican candidate and the Arlington County Republican Party were adamantly opposed to the proposal. Even on election day, there were claims that many voters marked their ballots for the Republican candidate as a protest against the plan.

Despite the hype, the Democratic incumbent, Matthew de Ferranti, won easily, with 61% of the votes against two other opponents. Naturally, proponents of the “missing middle” proposal proclaimed his win as an endorsement of the plan by the voters. However, there were probably other factors in play as well. Arlington is a deep-blue jurisdiction; it is rare for anyone other than a Democrat to be elected to the county board.

Notwithstanding the election results, there are indications that the members of the board are backing off some of the proposals. During the campaign, de Ferranti had declared that he would not support eightplexes and would support sixplexes only on larger lots. In a staff document two “potential options based on community feedback” were limiting the number of units per site to six, instead of eight, and capping the number of permits that could be issued annually.

In the Washington Monthly article, Birenbaum briefly discusses how some medium-sized cities in the country have adopted measures designed to allow “missing middle” housing in single-family areas. Portland, Oregon, is her prime example. She does not hold out much hope of that happening in her hometown of Arlington.

The Arlington County Planning Commission plans to hold public hearings in mid-December on the proposed missing middle zoning ordinance. The Arlington Board of Supervisors is expected to take action in early 2023.

This issue of affordable housing and single-family zoning would seem to create a dilemma for some participants on this blog. On the one hand, many seem to agree with Jim Bacon that local zoning ordinances are too restrictive and loosening them is the key to making more affordable housing available. On the other hand, many on this blog seem to believe strongly that elected officials should listen to, and carry out, their constituents’ wishes. So, what does a member of a board of supervisors or city/town council do — open up single-family zoning to allow structures other than detached houses in order to encourage the development of more affordable housing for the “middle” or listen to the outcry of owners of detached houses who are adamantly opposed to such changes that they feel threaten their way of life?

As the experience of Arlington is showing, it is not always the fault of government that zoning provisions are restrictive; many of the people that benefit from those restrictions like them and don’t want them changed.

This entry was posted in Housing, Land use & development, Planning and tagged Dick Hall-Sizemore. Bookmark the permalink.