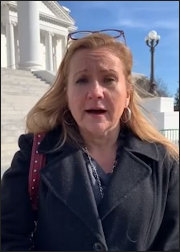 The gears are moving for the Second Amendment rally at the state Capitol scheduled for tomorrow. Buses are loading up with protesters. Law enforcement authorities are planning their crowd-control measures. Despite professions of everyone in charge that they want the event to take place peacefully, there are many disquieting signs. The most disturbing indicator, of course, was the arrest of three far-right extremists Thursday on allegations that they were planning to instigate violence.

But gun-rights sympathizers are arguing that Governor Ralph Northam is going to excessive lengths to maintain security. Not only has he prohibited protesters from carrying weapons on the Capitol grounds, they say security forces have erected heavy fencing around the Capitol and plan to limit admission to the area through a single entrance.

The gun-rights crowd is not responding well. State Sen. Amanda Chase, R-Chesterfield, has suggested on her Facebook page that protesters are “being set up.” With the assistance of the media, she said, Northam has laid the groundwork “to make the entire movement look like insurrection.”

If people show up wearing any kind of uniform, patch or other symbol on their clothing signifying they belong to a militia and something goes wrong you could/will be held as a domestic terrorist. If anyone steps out of line, all it takes is one person, it may even be a government plant. … If that plant does anything to disrupt the rally, you would/will be arrested as a domestic terrorist.

They have labeled us as potential domestic terrorists for a long time now. Anyone who has ever related to the 3%ers, a militia, or just belonged to any Patriot group … the groundwork has been laid to brand you as a domestic terrorist.

Chase offered no evidence to support concerns regarding the existence of “government plants” or a plot to make the rally “look like insurrection.” If she has proof to back up her statements, let’s see it. Otherwise, this is astonishingly irresponsible rhetoric coming from a state senator.

But she’s not alone. Sundance, a popular columnist on the widely read conservative Breitbart website, strung together a series of loosely related data points — a “remarkable confluence of events” — to suggest that “something is going to take place. What that ‘something’ might be is yet unknown.”

Read the comments to the Sundance post, and you’ll see a conspiratorial mindset among the commenters. “This is such an obvious trap,” says one. “This allows them to identify those that will fight against them.” Says another: “Note the exits are all in one corner area meaning the Democrats intentionally are driving the groups together to foment a riot. … Beware of any ambush set by KKK Blackface Northam.”

Northam and many others are worried about a repeat of the Charlottesville Unite the Right Rally that ended in tragedy. Regarding that parallel, however, there are three points worth making. First, there is no indication that leftist groups are organizing a counter-protest in Richmond. Violence flared in Charlottesville when rightist extremists clashed with leftist extremists. That combustible element is missing. Second, the violence in Charlottesville occurred due to the failure of law enforcement authorities to keep the antagonistic groups separated. Presumably, law enforcement authorities have learned from their mistakes. Third, for all the fears of a repeat, none of the Charlottesville violence was gun-related. So, yeah, Charlottesville was a traumatic event that Virginians don’t want to see repeated, but it’s a flawed analogy, and handling the gun-rights rally in Richmond as if it might be “another Charlottesville” makes no sense. The dynamics are very different.

(Update: An article in the Daily Mail says “Anti-fascist protesters plan to descend on the town as opposition,” but provides no supporting evidence for the assertion.

Update: The Guardian reports that anti-fascists will not mount a counter-protest at the rally. The anti-fascist groups cited threats of violence and their own opposition to some gun control.)

The conservative groups gathering in Richmond aren’t coming prepared for a rumble with Antifa and other leftist groups. The overwhelming majority want to engage in peaceful protest. The greatest danger, which I fear that Northam may not appreciate, stems from the fact that gun-rights militants feel totally alienated from the power structure. After nearly three years of unfounded Russia-Trump collusion hysteria, a fizzled Muller investigation, OIG revelations of FBI abuses in FISA applications, day-after-day of “bombshell” stories in the Mainstream Media about walls closing in on Trump, and now the Trump impeachment, these people are thoroughly convinced (not without reason) that there is such as thing as a “Deep State,” that the integrity of FBI and national security apparatus has been compromised, and that, driven by hatred, Democrats and Mainstream Media do want to overturn the 2016 election. The national media has squandered whatever right it once had to be trusted, and indeed the protesters trust nothing the media says.

That said, gun-rights activists are not well served by the inflammatory conjectures of social-media pundits and elected officials like Amanda Chase. And it doesn’t when El Presidente himself tweets, “Your 2nd Amendment is under very serious attack in the Great Commonwealth of Virginia. That’s what happens when you vote for Democrats, they will take your guns away.”

There is a risk that far-right extremists will provoke violence, and law enforcement authorities do need to take proactive action to shut them down. But think about it a minute. Are right-wingers who support gun rights going to start firing upon the crowd… of fellow gun-rights advocates? Does that make any sense at all? I don’t follow, and the gun-protesters probably see the illogic in the reasoning as well.

Here’s a different scenario: Gun rights advocates get into an altercation with law enforcement authorities, both of whom are primed to expect the worst of each other. What if Chase proves to be prophetic? What if a handful of protesters wear the wrong insignia and are arrested as domestic terrorists? How might a crowd of tens of thousands respond to that? What precautions has law-enforcement taken to prevent such an outcome?

As I’ve blogged before, Northam is in a damned-if-you-do, damned-if-you-don’t position regarding the prevention of violence tomorrow. I don’t envy his position (and I certainly don’t think he is conspiring to foment an incident to portray gun-rights backers as insurrectionists). But I do worry that, trapped in a no-more-Charlottesvilles paradigm, he and/or his law enforcement advisers are drawing the wrong lessons and that their crowd-control tactics might provoke the very violence they seek to avoid.

I wish Northam would do a better job of communicating his thinking to the public. I guess we’ll find out tomorrow if he made the right call. I’m glad I’m not in his shoes.

This entry was posted in Culture wars, General Assembly, Gun rights and tagged James A. Bacon. Bookmark the permalink.