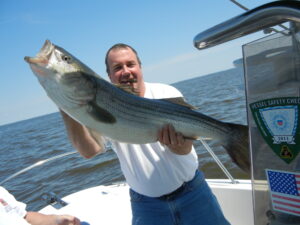 Commentary: This is a very positive change for the Chesapeake Bay. Menhaden will still be caught in Virginia waters but the regulation of that fishery will now be scientifically managed by the VMRC. The simple fact is that the Democrats have removed one corrupt burr from under the saddle of Virginia’s state government. This change in attitude was catalyzed by aggressive federal action by the Trump Administration. Good for both Virginia’s Democrats and Trump’s Commerce Department. Specific kudos to state Senator Linwood Lewis, D-Accomack, Del. Ken Plum, D-Fairfax, Senate committee chair Chap Petersen, D-Fairfax, Governor Ralph Northam, and U.S. Commerce Secretary Wilbur Ross. END_OF_DOCUMENT_TOKEN_TO_BE_REPLACED

Cats and dogs sleeping together. The long running saga of the General Assembly and Omega Protein vs. environmentalists and the Virginia Marine Fisheries Commission (VMFC) took a major turn recently. Our General Assembly (buoyed by campaign cash from Omega Protein) sought to use inaction to thwart the VMFC’s scientific management of a small fish called the menhaden in Virginia waters. The VMFC enlisted its east coast umbrella organization, the Atlantic States Marine Fisheries Commission (ASMFC), to cut Omega’s menhaden limits. Omega resisted citing General Assembly inaction on reduced limits as tacit approval of higher limits. The ASMFC (along with support from the Northam Administration) appealed to the Feds and won. The lower limits will stand whether the General Assembly likes that or not. The net result is that the General Assembly appears to have been forced into a corner. It seems that no amount of campaign contribution cash will get them out of that corner. Beyond the Battle of the Menhaden, this contest forces a question – is the unholy alliance between our state legislature and various special interests finally starting to crack? END_OF_DOCUMENT_TOKEN_TO_BE_REPLACED

Northam Comes to the Aid of Menhaden (But is Chap Petersen Paying Attention?)

Fish tale. Omega Protein, a Canadian owned company, has willfully exceeded its menhaden catch limit in the Chesapeake Bay. You can read the details here. The catch limit is controversial since menhaden is the only marine fish regulated directly by the Virginia General Assembly. All other saltwater fish in Virginia are regulated by the Virginia Marine Resources Commission. Every other Atlantic state lets their state fishery regulator and the Atlantic States Marine Fisheries Commission (ASMFC) set rules for menhaden in their waters. The US Congress chartered ASMFC in 1942. So, ASMFC sets catch limits for Virginia waters – one for the Atlantic and another for the Chesapeake Bay. In Virginia those limits are then incorporated into proposed legislation for the General Assembly. The most recent AMFC-set limits were put into a bill that was never voted on by the General Assembly. This left Omega Protein with two catch limits – the limit last passed by the General Assembly (based on ASMFC guidance) and the most current lower ASMFC limit. Once Omega Protein admitted it had exceeded the most current ASMFC limit Virginia was reported to the US Department of Commerce as being “out of compliance.” Last week Gov Ralph Northam sent a letter to the Secretary of Commerce requesting the feds to put a moratorium on menhaden fishing in the Virginia waters of the Chesapeake Bay. It seems that Northam is sending the General Assembly a message — clean up your act or I’ll ask the Feds to clean it up for you. But will the new Democratic majority in the General Assembly listen to Northam or Omega Protein?

END_OF_DOCUMENT_TOKEN_TO_BE_REPLACED

What, me worry? Omega Protein has admitted exceeding its menhaden catch limit for 2019 in the Chesapeake Bay. Omega Protein, a Houston-based company and wholly owned subsidiary of Cooke, Inc, a Canadian firm, operates a fishing fleet based in Reedville, Va. Employing about 300 Virginians, Omega Protein has been mired in controversy over the years regarding its heavy catch of menhaden.  Since this topic has been repeatedly covered on Bacon’s Rebellion, I won’t provide detailed background. However, the environmental group Menhaden Defenders operates an informative website describing the situation.

Menhaden Defenders writes, “The commercial menhaden fishery is made up of two sectors, a reduction fishery, which grinds billions of bunker up for fish meal and oil, and the bait fishery which supplies menhaden for lobster and crab traps. Reduction fishing is an antiquated practice that has been banned in every east coast state, except Virginia.” Virginia is the only east coast state that allows reduction fishing and is also the only east coast state that allows unlimited contributions to state politicians. Over the last 26 years Omega Protein has donated just under $600,000 to Virginia politicians, political committees and PACs with the majority going to Republicans.