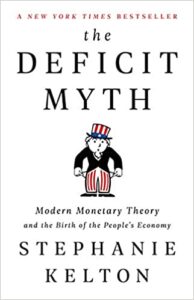 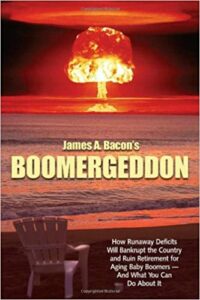 Saving America’s bacon. In 2010 Jim Bacon, blogrunner of this site, wrote a book titled Boomergeddon. The sub-title of the book is, “How Runaway Deficits and the Age Wave Will Bankrupt the Federal Government and Devastate Retirement for Baby Boomers Unless We Act Now.” The book is well written and contains considerable supporting detail but that sub-title pretty much sums things up. At the time of publication Bacon’s book amplified the conventional wisdom of the day — deficits are bad and, as our president might say, big deficits are bad bigly. That traditional belief has come under scrutiny lately. One leading critic of the theories espoused by Boomergeddon is Stephanie Kelton, an economics professor at Stony Brook University and former advisor to the Sanders campaign. Her new book, published in 2020, is titled, The Deficit Myth.  One paragraph from the description of Kellon’s book on Amazon.Com sums up her thesis vis-a-vis Boomergeddon. “Kelton busts through the myths that prevent us from taking action: that the federal government should budget like a household, that deficits will harm the next generation, crowd out private investment, and undermine long-term growth, and that entitlements are propelling us toward a grave fiscal crisis.” Kelton believes the United States has considerably more room to incur debt without causing economic harm and we should get about the business of incurring more debt. Paying homage to her Democratic-Socialist roots, Kellon sub-titled her book, “Modern Monetary Theory and the Birth of the People’s Economy.”