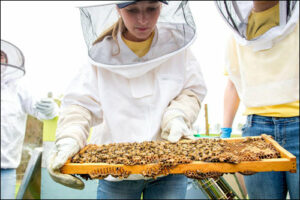 A Sweet Briar student holds a honeycomb from one of the school’s beehives.

Women account for a rapidly increasing percentage of the nation’s farmers, and in that trend Sweet Briar College sees a business opportunity. The women’s college, which nearly shut down due to financial difficulties a couple of years ago, has no intention of competing with Virginia Tech’s traditional agricultural sciences program. Instead, it is building a program around artisinal farming.

Located on 3,200 acres in the shadow of the Blue Ridge Mountains, the Sweet Briar campus once was a working plantation with tobacco and agricultural crops. Now it hosts vineyards and beehives, and it is tearing out the old tennis courts to install a nine-bay, 27,000-square-foot commercial greenhouse. In the future, the school plans to raise livestock and plant orchards.

According to the 2017 U.S. Census of Agriculture, 56% of all U.S. farming operations have at least one female decision-maker, and the percentage of female farmers has been rising rapidly, reaching 1.23 million, reports the News & Advance. Says President Meredeith Woo: “We see a very interesting megatrend in which we want to be at the forefront and make sure that we’re educating women [and] exciting women about very interesting possibilities in this new century which they will own.”

The farming will be market-driven. Sweet Briar expects to sell 1,000 pounds of raw honey to Charlottesville-based The Elysium Honey Company. It is selling grapes to Virginia wineries. And it has partnered with Lynchburg-based Meriwether Godsey, the school’s food service provider, to take the greenhouse produce.

“If they say they want artichokes, we’ll grow them artichokes,” says Nathan Kluger, director of agricultural enterprises. “We’re heavily enterprise-driven. I think that’s what’s going to make us unique and how that’s going to overlap with the student experience here on campus — that’s not something you’re going to get anywhere else.”

Bacon’s bottom line: As college enrollments decline along with a shrinking college-age population, many small colleges like Sweet Briar are going out of business. To survive, small educational institutions need to find a niche in which they can excel. Sweet Briar has found a niche that plays into two mega-trends: the increasing number of women farmers and the growing vitality of artisinal agriculture.

The school also has established a Center for Sustainability, but there may be reason to hope that it will offer more than anti-capitalist social-justice bromides. Maybe I’m reading too much into a few quotes in a single newspaper article, but it appears that Sweet Briar will be teaching business principles and showing how to build a better world by working within a market-based system.

There are two broad paths to bringing about social change. One is to enlist the coercive power of the state to tax and regulate the population into submission. The other is to harness the power of creativity and entrepreneurship to show people a better way. I’m crossing my fingers and hoping that Sweet Briar is choosing the path of entrepreneurship, innovation and persuasion.

This entry was posted in Agriculture & forestry, Education (higher ed), Entrepreneurialism and tagged James A. Bacon. Bookmark the permalink.