Stuck in a Snowstorm: Better to Have a Gas- or Electric-Powered Car? 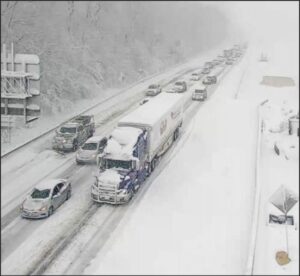 Here’s what Interstate 95 looked like near Fredericksburg yesterday. Both northbound and southbound sections were closed due to snow and ice. Photo credit; Virginia Department of Transportation via the Associated Press

Hundreds of motorists were stranded on Interstate 95 in freezing temperatures last night after two tractor-trailers jackknifed in a snowstorm and triggered a chain reaction as other vehicles lost control. Both lanes of the Interstate were closed. As night fell, reports the Associated Press, motorists posted messages on social media about running out of fuel, food, and water. Senator Tim Kaine, who was commuting between his residence in Richmond and the Capitol, said he was stuck in his car for 21 hours.

NBC News correspondent Josh Lederman, who spoke on NBC’s “Today” show by video feed from his car, had this observation: “You really start to think if there was a medical emergency, someone that was out of gas and out of heat — you know it’s 26 degrees, and there’s no way that anybody can get to you in this situation.”

People can live without food and, for a time, without water. If worse comes to worse, they can pee on the side of the road. But the potential killer is hypothermia. The AP account tells of one motorist who stopped his car engine at least 30 times to conserve gas and run the heat just enough to stay warm.

I’m wondering how many of the stranded cars were electric vehicles and what happened to them.

Here’s a problem with current battery technology: the colder the outside temperature, the faster lithium ion batteries lose power. According to Green Car Future, a pro-EV website, the Tesla Model S owner’s manual comes with this warning: “In cold weather, some of the stored energy in the Battery may not be available on your drive because the battery is too cold.”

Here’s a related problem: electric vehicles’ heating systems rely upon resistance heaters, which require great amounts of electrical energy. As Green Car Future notes, “Right at the times you will need that burst of energy … your battery power is being obstructed by the cold conditions.”

The nightmare scenario, not considered in the Green Car Future blog post, is getting stuck for hours… in the freezing cold… relying upon an electric battery to generate resistance heat. Obviously, gasoline-powered cars, which capture heat from passing air over the running motor, can run out of fuel, too. Here’s my question: How long would a fully-charged EV battery have lasted in last night’s I-95 scenario compared to a car with a full gas tank?

According to Internet sources of unknown reliability, older cars can idle (and generate heat, presumably) for as long as 52 hours on a full tank. Newer cars can go less than 12 hours.

Green Car Future says that Hyundai and Kia are working on EV vehicles that rely upon more energy-efficient heat pumps to warm drivers and their passengers. The heat pumps use only 50% of the electricity of the resistance heaters. Moral of the story: if there’s any chance you might find yourself stranded in the freezing cold for hours on end, you’d better be driving a Hyundai Ionic Electric with a heat pump.

Personally, I’d take my chances with a gas-powered car.

This entry was posted in Disasters and disaster preparedness, Transportation and tagged James A. Bacon. Bookmark the permalink.