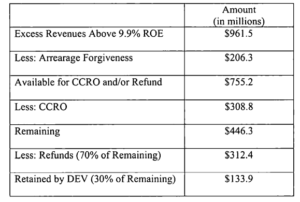 The State Corporation Commission is entering the key phase of its so-called “triennial review,” which in Dominion’s case covers an extra year because that is what it asked of the Virginia General Assembly, and the Assembly seldom declines DEV’s requests. This is the first full audit of the company’s finances since 2015, which covered the two prior years of 2013 and 2014.

In 2015, the company was also found to have earned excess profits and ordered to make refunds. The two years in between, 2015 and 2016, were never fully reviewed, again thanks to a compliant General Assembly and a bill signed in 2018 by Governor Ralph Northam. That bill pushed this current case off until 2021, with the decision unlikely until the current statewide election is over.

Why isn’t the SCC recommending a return to ratepayers of the entire $1.14 billion in excess profits? Carr, in this testimony, walks readers through the accounting.

First, the official return on equity amount is surrounded by a 70 basis point collar. That allows the utility to earn another 70 basis points of profit above 9.2% before any dollar can be considered for refund. That moves about $180 million out of the surplus and into the company’s treasury (from customers to ratepayers.)

Second, the General Assembly protected the utility from any financial damage to its revenue from the COVID-19 pandemic. Another $206 million of the excess profits have been used to reimburse the company and its stockholders – in full – for unpaid bills during the recession. (That is just the amount through the end of 2020, and the General Assembly just voted to continue protecting the company into 2022. Those will be more dollars moved from potential refunds to company profits.)

Third, the same 2018 legislation mentioned before allowed the company to use excess profits on certain favored capital investments, the largest of which in this case was construction of the two-turbine offshore wind demonstration project, now operational. In all $309 million is diverted to cover those capital costs with so-called “customer credit reinvestment offsets,” leaving $446 million in excess profits that could be used for refunds.

But going all the way back to 2007 legislation, adjusted in a 2013 bill, 30% percent of those excess profits are also retained by the company. That $134 million kept by stockholders brings us to the figure of $312 million that Carr and the SCC staff recommend should be returned to ratepayers, just a bit above one quarter of the actual excess profits.

Looking at future revenue needs the staff then recommends a $50 million annual rate reduction. Why that figure? Again, you must return to that 2018 legislation in which the General Assembly and Northam told the SCC that there could be no higher reduction than $50 million per year, no matter what the accounting indicated.

Carr and the staff indicated that without that handcuff, a very substantial rate cut of $212 million per year would have been their recommendation instead. That is based on another staff proposal which is part of this case, and being fought by Dominion, a reduction in the future return on equity to 8.7% (down 120 basis points).

This is the headline summary of hundreds of pages of testimony in what is likely to be the largest case record in SCC history by far. There are several major arguments under way between the parties over accounting issues for the three-judge SCC to settle before reaching a final decision.

One of the largest, also touched on by Carr, involves a number of coal-fired generation units which Dominion has already or soon plans to retire, even though they have years of useful life left. The company is entitled to full compensation for the hundreds of millions in stranded costs, but the timing for collecting that compensation is a huge issue.

Dominion has claimed the costs in full during this accounting period, which is a major reason it shows no excess profits and claims it really needs more money. But Carr recommends a 25-year amortization period for those costs, all of them tied to General Assembly determinations that scrapping those plants now is needed to save the planet from a climate catastrophe.

Should the SCC agree with the staff accounting and order the $312 million in refunds, recent Virginia general assemblies and governors will have taken an extra $830 million out of the pockets of just 2.7 million Dominion customers, residential and business, non-profit and government. That is over just four years of the 14 which have passed since the General Assembly took full control of utility regulation in 2007.

The SCC, of course, could let the company keep it all and leave the excess base rates in place. Stay tuned.