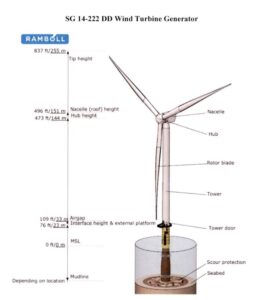 The 14.7 megawatt turbines to be used in CVOW. Click for larger view.

The Virginia State Corporation Commission (SCC) has abandoned its push for an offshore wind performance standard fiercely opposed by Dominion Energy Virginia. It agreed instead to some capital cost limitations for its project that the utility has endorsed .

In a decision released today, the two commissioners accepted in full a stipulation put forward several weeks ago by Dominion, Virginia Attorney General Jason Miyares, Walmart and several environmental groups. Should the capital costs of the project and related transmission lines exceed $10.3 billion, customers will only have to finance a portion of the excess. Beyond $11.3 billion the utility will finance the excess.

Dominion has continued to list $9.8 billion as the cost of its plan to build 176 wind turbines 27 miles off Virginia Beach, but with the stipulation’s amendments to its order the SCC has signed off on a potential price of almost $14 billion, subject to its review of the reasons for the cost overrun.

Several of the same parties, including Miyares in his statutory role as consumer counsel, had initially proposed and endorsed a performance standard. It was adopted by the SCC, and set a power output target for the project over 30 years, based on Dominion’s own statement that the turbines would produce at a 42% capacity factor. Should they fail to operate up to that level, requiring the utility to buy outside power to serve its demand, that expense could not have been passed on to the customers, under the SCC’s first order.

Despite good results on the technology to date, Dominion insisted that the requirement put unfair risk on its stockholders and stated it would scrap the project entirely. Miyares and the others then backed off, went to the SCC with the stipulation, and said under oath they thought it protected consumers. In its order today the SCC pointed to that near-unanimous move to dump the first form of consumer protection for the second as a reason it relented.

In what will likely be her last word on the topic, retiring Commissioner Judith Jagdmann added a personal concurrence to issue one more plea to the General Assembly, which basically ordered the SCC to approve this project. Given what the project is expected to do to energy bills in Dominion’s territory she asked legislators to provide:

general fund appropriations or other funding for this Project. Such public policy determinations by our legislators would help spread the substantial costs of this Project, which currently fall squarely on most of Dominion’s customers, among all in the Commonwealth who stand to benefit from the clean energy and economic expansion benefits associated with this Project that the Commission is required by statute to consider.

She wrote “most” of Dominion’s customers because legislators also exempted large segments of their constituents from paying for the wind turbines, effectively raising the cost for everybody else. Consumer bill estimates to date haven’t made that adjustment.

This basically ends the SCC’s role in the project approval process. It has already imposed an additional charge on customer bills to begin paying for the turbines, with an increase for next year already in the works. The costs on bills will peak later in this decade.

Dominion’s next hurdle is the federal environmental impact review. The Bureau of Ocean Energy Management (BOEM) just published its draft environmental impact statement (read the EIS) and has opened the 60-day public comment window (here). Three hearings are also set in early 2023. The EIS may be the focus of litigation, as it often is with major energy developments.

Wind energy supporters, the utilities and supportive politicians, from President Joe Biden (D) down to Virginia Governor Glenn Youngkin (R) have been greasing the skids on that EIS process by seeking to silence likely critics on at least two major fronts.

Recently it was announced that the various East Coast states with wind projects facing contentious EIS reviews are creating a multi-state compensation fund for the commercial and recreational fishing industries. In Virginia’s case state law has already been amended to clear the way for Dominion to pass that bill to its customers (or at least those not exempted). The compensation fund could eliminate opposition from that industry.

And federal authorities have floated a document it claims is a mitigation plan to protect the endangered right whale population, which has a migration route to warm water calving grounds through the same coastal waters. A comment period on that is also underway to see if it will satisfy environmental and endangered species advocates.