Save the Jackson Arch 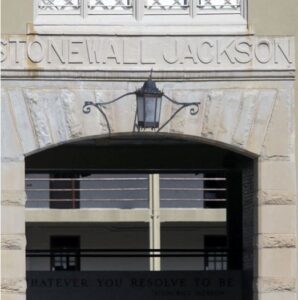 This past summer, Washington and Lee University decided to keep Robert E. Lee’s name as part of the college’s name. Sentiment to keep Lee’s name was strong in and around Lexington.  “Retain The Name” signs were commonplace.  It’s not too late to trot those signs out again, to retain — or save, actually — another prominent name in Lexington and Virginia’s history — Stonewall Jackson.

Jackson’s name is carved into one of the arches at the Virginia Military Institute’s Old Barracks. The arch is commonly referred to as “Jackson Arch.” This past May, the VMI superintendent recommended that Jackson’s name be removed from the arch, and the Board of Visitors concurred. The stated reason: “certain venerations to the ‘Stonewall’ persona were overstated within the context of his contributions to VMI.”

VMI should have an objectively compelling reason for removing the Stonewall Jackson name from Old Barracks. If the Board of Visitors is concerned about Jackson being over-venerated on post — those concerns have already been addressed. The Jackson statue has been removed. But that’s not all. The Board of Visitors plans to take Jackson’s name off Memorial Hall. It has even decided to redo a sign with a quote attributed to Jackson. Apparently the BOV feels it’s important to make it crystal clear that Jackson wasn’t the originator of the quote, and he wasn’t a general when he said it — just a faculty member at VMI. (Talk about spiking the ball.)

Old Barracks is on the National Register of Historic Places. If the Stonewall Jackson name sign can’t be removed, it will probably have to be sandblasted off. Is that really necessary? If so, then tell us why.

Many of us were disheartened to see the Robert E. Lee statue removed from Monument Avenue. I am a member of the Sons of Confederate Veterans, with six ancestors who fought for the Confederacy — and even I have to admit that I couldn’t make a strong case for keeping Lee’s monument there. The Civil War ended more than 150 years ago. Modern-day Richmond is a city with a majority African-American and progressive population. For many people nowadays, Confederate statues symbolize a time that’s long gone. Richmond has done its time as the symbol of the Confederacy.  If it wants to move on, that’s its right.

You could say similar things about the Jackson statues on Monument Avenue and in Charlottesville. I know of no major involvement that Jackson had in either Richmond or Charlottesville during his lifetime. Jackson fought one major campaign near Richmond — the Seven Days’ Battles, one of his worst battlefield performances. Worn out from sleep deprivation during the Shenandoah Valley campaign, Stonewall was ineffective for much of the Seven Days’ fight. Jackson was never a major part of the legacy of Richmond or Charlottesville. But that’s not the case at VMI.

The Barnes and Thornburgh report does not indicate that a critical mass of cadets and alumni want the Jackson name to be removed from Old Barracks. In fact, the majority of people the firm interviewed didn’t think the Jackson statue had to be removed.

In its surveys of the VMI community, Barnes and Thornburgh asked this question: “Based on what you have seen and heard, how would you characterize support among the VMI community for the following?” It then listed several proposed actions, one of which was “The removal of the statue of Stonewall Jackson.”  Eighty percent of the cadets interviewed and 79% of the alumni said that, from what they could tell, no one, or only a few people, within the VMI community wanted the statue removed. Sixty-eight percent of alumni and 66% of cadets interviewed said that they personally opposed, either strongly or somewhat, removing Jackson’s statue.

Old Barracks is a National Historic Landmark — something that, by definition, shouldn’t be altered without a compelling reason. Removing the name sign –especially if it has to be destroyed in the process — is a step too far. It would seem petty, and mean-spirited. VMI is supposed to produce leaders, not petty and mean-spirited people.

As of Columbus Day, the VMI Board of Visitors had not yet decided what to do with Jackson’s name on Jackson Arch. There’s still time for them to do the right thing, and leave Jackson Arch alone.  Retain — actually, save — Jackson’s name.

This entry was posted in Uncategorized and tagged Donald Smith. Bookmark the permalink.