Rush Hour Will Never Be the Same 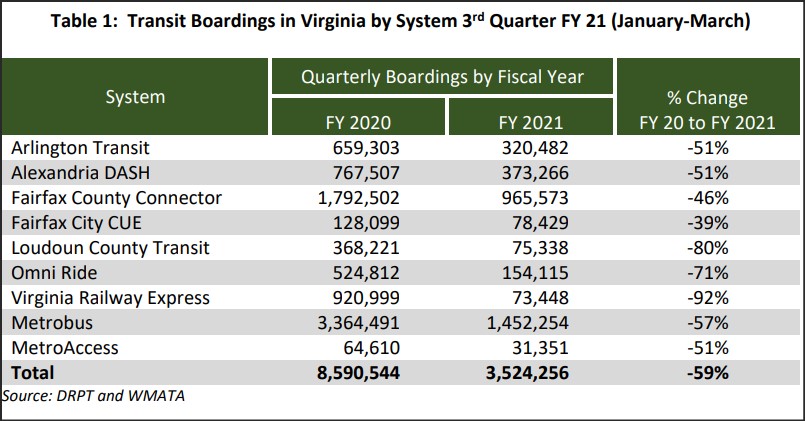 In fiscal 2018, the Commonwealth of Virginia budgeted $582 million to the Department of Rail and Public Transportation (DRPT). Spending on rail, buses and other forms of mass transit soared to $935 million in the current year (fiscal 2022), and is scheduled to recede somewhat to $865 million in the budget submitted by Governor Ralph Northam for fiscal 2023.

Assuming that legislators didn’t alter the numbers much during the recent General Assembly deliberations, DRPT spending will be 49% higher than it was five years previously.

In the chart above, you can see how disconnected spending is from reality. Mass transit ridership in Northern Virginia, which accounts for the vast majority of bus and commuter rail traffic in the state, plummeted between fiscal 2020 and 2021 by 59% overall. Ridership on the Virginia Railway Express dropped an eye-popping 92%.

In what world does it make sense to increase spending on mass transit by nearly 50% even while ridership has crashed by nearly 60%?

Once upon a time, one could mount an intellectually respectable case for bolstering spending on mass transit, especially in Virginia’s major metropolitan areas. In densely populated districts where it is impossible to increase transportation capacity by building new roads, it does, in theory, make sense to increase capacity by providing people the option of traveling by bus or rail. This logic made all the more sense during the 2010s, a period marked by a strong urban revival across Virginia. People were moving back into urban centers, developers were building mid-rises and high-rises, and the influx of affluent riders living in bus and rail corridors could be expected to fill seats and pay fares.

To be sure, there have been signs for some time that the rosy ridership projections would not pan out. Transit ridership plateaued and then began eroding several years ago. Uber and Lyft were widely blamed.

Then came COVID. Riders stayed away from bus and rail for fear of catching the virus. One could reasonably hope that those riders would return when the pandemic receded. But another thing happened. Millions of Americans discovered they liked working at home, and contrary to the fears of supervisors everywhere, they worked more productively than they did at the office. Sure, they’d get momentarily distracted by doing the laundry or feeding the cat, but they didn’t waste time yakking by the coffee machine about the UVa-Tech football game, gossiping about co-workers, or bellyaching with office mates about the boss.

Virginians curtailed their driving during the COVID-induced recession. Total Vehicle Miles Traveled dropped from 86.8 million miles in 2019 to 74.5 million miles in the first COVID year, 2020 — a 14.2% decline (I could not find data for 2021.) But the drop-off for mass transit was far more acute.

The big question is whether driving and ridership will rebound, and by how much. It would be prudent to expect a partial snap-back to pre-COVID habits. At the same time, Virginia policy makers must consider the possibility that transportation patterns have permanently changed: that the locus of work for millions of Americans has shifted from the office to home, and that rush hour will never be the same.

Virginia needs to take a good, hard look at the billions of dollars it spends on transportation. That includes roads and highways. But nowhere is the need for re-evaluation more manifestly evident than for mass transit.

No such re-think is likely to be forthcoming as long as Virginia enjoys a gusher of revenues from COVID stimulus and inflation. But the joy ride can’t last forever, and at some point we’ll have to start making hard choices again. Unless bus and rail ridership surges, the first place to start chopping is mass transit.