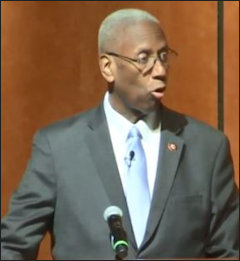 Virginia lost a good man this week when Congressman Don McEachin passed away at age 61 due to cancer. Having served with McEachin in the Virginia House, I can attest to his fine nature and dedication to his principles. While I didn’t have the fortune to work with him directly on legislation, he was, without fail, a kind and thoughtful man who had deep respect for and from his colleagues. It was an honor to know him and I will remember him very fondly.

Don McEachin was a good, gentle, and kind man. Please keep his soul and his family in your prayers.

While it is still a tad early for candidates to publicly begin the process to replace McEachin, the private conversations will turn quickly to whether or not his wife, Colette, Richmond’s Commonwealth Attorney, decides to run for his seat in a special election.

Other candidates who have been mentioned but have not said, “No, thank you.” include Delegate Lamont Bagby and Senator Jennifer McClellan. The 4th Congressional District was won just a month ago by McEachin with 65% of the vote. It will again be represented by a Democrat.

From Chris Saxman’s The Intersection. Used with permission.

This entry was posted in Politics and tagged Donald McEachin, special elections. Bookmark the permalink.