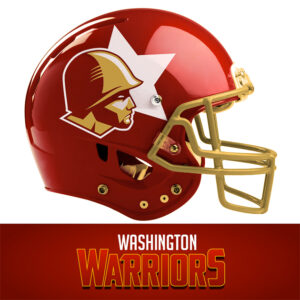 A new look for DC football?

And so it goes. The Washington Redskins issued a somewhat surprising announcement today stating that the organization will “undergo a thorough review of the team’s name.” While the statement does not definitively say that the team name will be changed, it is almost guaranteed to change given today’s political climate. Even Dan Snyder wouldn’t undertake a review of the controversial name only to conclude that “everything is fine with the name.” Would he?

A rose by any other name. The Washington Redskins were once a powerhouse in the NFL but fell into the cellar just before they were purchased by Dan Snyder. While it would be unfair to blame Snyder for the fall it is very fair to blame him for the 20+ years of misery ‘Skins fans have endured under Mr. Snyder’s management. Throughout Snyder’s tenure the name “Redskins” has been very controversial. Many people see the name as a significant slur against Native Americans although that sentiment is not universal. During a flare up of the Redskins name controversy in 2014 it was pointed out that a high school on the Navajo Reservation in Arizona used “Redskins” as their team name and wanted to keep the name. Snyder steadfastly defended the name and vowed that it would never change. Apparently 2020 has become the official year of things that will never change changing.

Recent events. The protests against the murder of George Floyd and racism in America catalyzed the latest round of opposition to the Redskins name. The Redskins’ press release describes a multi-week discussion between the team and NFL leadership over the name. Representatives from the City of Washington, D.C.,  recently stated that they would not allow the team to build a new stadium in the city unless the name was changed and Nike threatened to stop making Redskins’ uniforms. FedEx, who owns naming rights to the stadium where the team plays in Maryland, also wanted a name change. The die was cast.

One fan’s view. As a lifelong fan of the Washington Redskins I am supportive of the decision to rename the team. Some people, including many Native Americans, certainly found the name highly offensive. Regardless of whether everybody found the name offensive or not, enough took offense to make a change. The sporadic controversies over the name were an ongoing distraction for the team, its players and its fans. Finally, anything that might disrupt the bad karma of the last twenty years is welcome. D.C. (The District of Champions) has a recent Stanley Cup and won the last World Series. It’s time for the football team to return to form unencumbered by a legitimate sense of frustration or outrage over the name.

Now what? The obvious question is what new name will be chosen. Hopefully the team brain trust will avoid any name with even a hint of controversy. The Washington Bullets became the Wizards. The Houston Oilers became the Tennessee Oilers then the Tennessee Titans. This won’t be the first time a professional sports team’s name has changed. Starting at the beginning … should the team even use Washington as the city name? It would be a shame to have to change again if that name falls out of favor based on General George’s slaveholding past. “D.C.” is available as a synonym to Washington in this context. But the DC what? They could reinstate “Senators” although that organization has a lower approval rating than even the Redskins of the last 20 years. “Monuments” might work until they are all torn down. “Traffic” or “Traffic Jam” would be apt. The “D.C. Filibuster” would be an accurate portrayal of the team’s running game. I’m leaning toward following the Tennessee Titans down the mythical being path with the D.C. Dragons.

Put your team name suggestions in the comments.

This entry was posted in Culture wars, Uncategorized and tagged DC, Redskins. Bookmark the permalink.