So much for the red wave, much less the red tsunami, or the red once-every-60-million-years-asteroid-extinction that would obliterate the Democratic Party that a few delusional conservative bloggers imagined. The mid-term elections resulted in a red ripple. As of this writing, it looks like Republicans will win a narrow majority in the House of Representatives, while Republican control of the Senate, while not yet determined, remains very much in doubt.

Here in Virginia, Republicans gained one House seat — Jennifer Kiggans displaced Elaine Luria in Hampton Roads — but the Dems survived two hotly contested races, returning Abigail Spanberger and Jennifer Wexton to Congress. The outcome was better for Team Red than a poke in the eye with a sharp stick… but still disappointing compared to its high expectations. 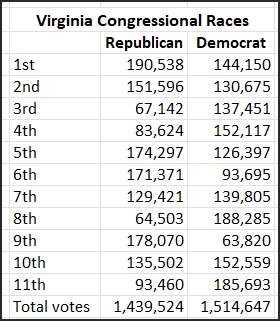 If there was ever any question, Virginia remains a blue state — perhaps we could more generously say a blue state with a purplish tinge. With 99% to 100% of all precincts reporting this morning, the Virginia Department of Elections reports Democratic congressional candidates winning 1,515,000 votes to Republicans’ 1,439,000 votes.

If that’s the best the GOP can muster in an off-year election, which typically goes against the party that holds the White House, with 8% to 9% inflation, broken borders, raging culture wars, runaway budget deficits, declining stock market, crime in the streets, and all the rest, Republicans have a lot of work to do. It appears that the Democratic strategy of running on abortion and against Donald Trump worked.

The silver lining for Republicans in the national elections was the strong showing of Ron DeSantis in Florida. DeSantis ran on a populist conservative, Trump-like platform without Trump’s baggage of narcicissm, election denial, Jan. 6 dereliction of duty, and capacity to ignite the incandescent hatred of Democrats and the mainstream media. DeSantis trounced his opponent in the gubernatorial race, effectively turning Florida over his four years in office from a purple state into a red state. According to Newsweek, bookmakers now rate DeSantis the favorite to be the next president of the United States, behind Trump and and Biden. The challenge for Republicans is to retire Trump to the sidelines while building on the coalition that coalesced around him. DeSantis looks like the man who could do that.

An important question that awaits analysis is the degree to which the “parents rights” movement in public schools remains a potent political force. This is the movement that vaulted Governor Glenn Youngkin to national prominence. The culture wars playing out in Virginia schools did not appear to have much impact on the congressional elections — school board policy is, after all, a localized affair. But high-profile school board races in Northern Virginia and Virginia Beach did take place yesterday. I’ll report back on those results as details come in.

As the saying goes, politics is downstream from culture. And Democrats control the commanding heights of culture in our society — universities, the media, the museums, Hollywood, the arts, most of K-12 education, and, until Elon Musk took over Twitter, social media. Democrats have hugely disproportionate power to set the national agenda, frame how voters perceive the issues, and control the information they receive. Dems have built a massive apparatus of nonprofit advocacy organizations and perfected the art of lawfare. If conservatives want to resist, they can’t wait until election day to cast their votes. They have to go about the hard work of recapturing the nation’s cultural institutions. Until they do, I think we’ll experience many more disappointments like Nov. 8, 2022.

This entry was posted in Elections and tagged James A. Bacon. Bookmark the permalink.