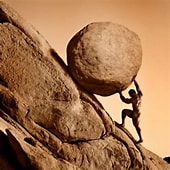 The armies of the progressive left are what the great political scientist George Edwards called “Prisoners of Their Premises.” Many persons and institutions are captives, to a greater or lesser degree.

Lesser is better in this case. Mistakes flow from the best of intentions. You can learn from them or repeat them.

The United States military late in the Vietnam war mandated and then made a science out of analyzing its mistakes in order to learn from them.

At the unit level, soldiers, sailors, airmen and Marines debrief after every training and combat mission. At higher levels the reviews are periodic, but also professionally honest. Combat training schools capture, but do not enshrine those lessons. Because there is always a next time, newer equipment, newer force compositions, newer enemies and newer lessons.

It is the only way to improve systematically.

Many progressives, in solitary confinement with their dogma, are often wrong but always certain. When their policy prescriptions fail to provide the predicted results, which is most of the time, outcomes are ignored or blamed on outside factors beyond their control. Core beliefs, unchallenged, are undisturbed.

The left declares public policy initiatives good or evil rather than promising or unpromising.

The playbook is to launch broad and instant assaults in the media, the arts and the universities on the people who do not agree with them, not just on their policy prescriptions. Then under no circumstances admit error. Thus it is with the recent voting law changes in Virginia and Georgia.

Hyperbole occurs on the right, but in today’s America it is only called out by the dominant institutions of the culture when it comes from that direction. Then the same institutions paint everyone with whom they disagree, not just extremists, as racists. No matter what the issue.

The hyperbole has bordered on hysteria in the cases of voting law changes.

Virginia. The left, as represented by the press in this state, was wildly enthusiastic and self congratulatory about the extensive changes made by Democrats to Virginia’s voting laws in 2020. Most of these were technical changes, but a few really did change the system.

The most controversial was perhaps the elimination of voter ID. I personally did not agree with that one for reasons of election integrity. Other changes appear to make the system harder to administer and will delay results in close races.

But it is indeed true that to the winners go the spoils. I don’t begrudge them their policy changes unless and until I see adverse consequences.

In this case they assumed vast new troves of voters previously disenfranchised would be freed of their chains and rush to the polls. The advocates of that legislation may have wished to express a little humility while awaiting outcomes.

Turnout in the 2021 election proved nothing special.

Fifty-five percent of the registered electorate voted in 2021. In the 1993 election, in which George Allen crushed Mary Sue Terry, turnout was 61.1%%. In 1989, when Doug Wilder beat Marshall Coleman in a cliffhanger, it was 66.5%.

Georgia Republicans just passed a far-reaching voter suppression law that is shockingly blatant in its efforts to restrict voting.

Opponents labeled it an attack on voting rights, aimed specifically at suppressing the minority vote. Backlash from the corporate world included Major League Baseball moving its All-Star Game from Atlanta.

President Biden, reliably clueless, said the law amounts to “Jim Crow in the 21st Century,” calling it “un-American” and “sick.”

… after three weeks of early voting ahead of Tuesday’s primary, record-breaking turnout is undercutting predictions that the Georgia Election Integrity Act of 2021 would lead to a falloff in voting. By the end of Friday, the final day of early in-person voting, nearly 800,000 Georgians had cast ballots — more than three times the number in 2018, and higher even than in 2020, a presidential year.

So, two different voting law changes: Virginia and Georgia. One proclaimed by the left as emancipation of voters from chains resulted in average turnout. Georgia’s new law, proclaimed evil and “sick,” is proving to support the highest turnout ever.

What to do. I recommend the progressive left try to escape from the prison of its own premises — it’s own dogma.

First, listen to those with different opinions. Disagreement is not sacrilege unless you consider your positions to be revealed truth.

Then watch for results before preemptively declaring right or wrong, good or evil policies that merely have potential for better or worse.

And learn the lessons that are presented in plain sight.