Pious Platitudes about Poverty and Crime 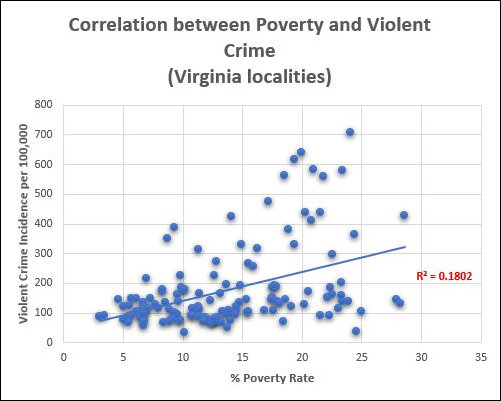 The City of Petersburg has the highest homicide rate in Virginia, with 53.5 killings per 100,000 residents since 2013 — exceeding Virginia’s other homicide hot spots of Danville, Hopewell, Richmond, and Portsmouth. So reported the Richmond Times-Dispatch in a recent article.

In talking to the RTD, Petersburg Police Chief Kenneth Miller was reluctant to blame the violence on the city’s socioeconomic challenges. “I was raised poor and I’m police chief now,” he said. “I can’t give in and say, well, because we’re poor we can’t [behave in a more acceptable way]. I think poor people want good policing and they want [public safety] just as much as anybody does.”

It is the conventional wisdom in the United States today — a belief that permeates the political establishment, journalists, and the pundit class — that poverty is a “root cause” of violence. The correlation between poverty and violent crime is so widely accepted that it needs no justification or empirical support. But is the connection as strong as the chattering class thinks it is?

To get a sense of the relationship here in Virginia, I plotted the estimated 2017 poverty rate for each locality as reported by the U.S.D.A. Economic Research Service and the incidence of violent crimes per 100,000 population in 2015 as found in County Health Rankings and Roadmaps, which publishes a wide range of social, health and economic indicators. The results can be seen in the scatter graph at the top of this post. Clearly there is a correlation but, with an R² of .18, it is not a strong one. (The R², or coefficient of determination, measures the proportion of the variance explainable by an independent variable, in this case poverty.)

Moreover, it’s not clear that “poverty” is a causal factor at all. This may be a case where poverty is correlated with other factors — low education levels, high incidence of substance abuse, prevalence of single-family households, high teen birth rates, whatever — that are, in fact, the real “root” causes of crime. In other words, poverty may be correlated with crime because it, like crime, is a symptom of other factors. To test that proposition, I correlated the violent crime rate with the percentage of single-family households (also found in the County Health Rankings and Roadmap). The result: 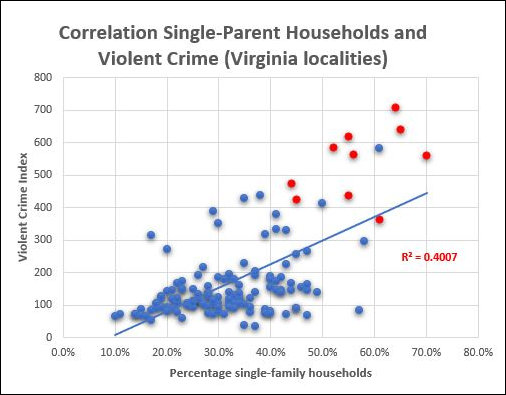 That stands to reason. Raising children is a difficult business. It helps when there two parents in the household to exert discipline, teach self control, and counteract the negative influence of peers. With fewer bread winners, single-family households also happen to be far more likely to be poor.

While significant, the correlation between single-parent households and crime still leaves a lot of variation to be explained. One variable that jumped out from my perusal of the data was the “urban” factor. Note the red data points above. They represent the following urban-core localities — Richmond, Hopewell, Petersburg, Roanoke, Norfolk, Portsmouth, Newport News, Fredericksburg, Charlottesville, and Danville. Because they have high levels of single-family households, one would expect them to experience higher rates of violent crime. However, all but Danville are above the trend line, indicating that these cities experience more violent crime than otherwise would be expected. Several small cities — Franklin, Radford, Galax — also are high-crime outliers above the trend-line. That pattern suggests that the clustering of poor people geographically might contribute to crime.

It would be fascinating to see if there is a synergy between poverty and single-parent households by plotting the relationship between violent crime and the percentage of poor single-family households in a locality. Similarly, it would be interesting to explore the role of race/ethnicity while controlling for poverty and other sociological variables.

A thorough explanation of crime also would delve into factors that likely can’t be measured at all. Petersburg Mayor Sam Parham talked about changing attitudes. “I’m a Generation X’er, and growing up in Petersburg, we had some fights and we had some people when I was younger, as a kid, who would pull out a gun,” he said. “But they wouldn’t shoot anybody, they’d just shoot up in the air.” I can’t think of any way to quantify the desensitization to violence.

Besides focusing on high-crime localities, we could ask what we could learn from low-crime localities. For example, Buchanan County in far Southwest Virginia has a 27.9% poverty rate, significantly higher than Petersburg’s 21.8% poverty rate, and with the demise of coal mining, its economic prospects are just as dismal. Yet Buchanan’s violent crime rate of 145 per 100,000 population is one-third of Petersburg’s rate of 560. What could account for such a disparity?

Public policy should address “root causes” rather than throw money at symptoms. But first we need to understand what those root causes. And we can’t do that without questioning the pious platitudes of the conventional wisdom.

This entry was posted in Crime , corrections and law enforcement, Poverty & income gap and tagged James A. Bacon. Bookmark the permalink.