Norfolk Needs a Newspaper, So Does Virginia Beach 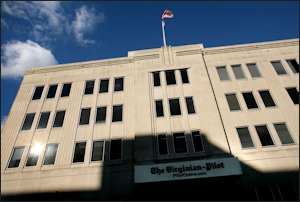 The Virginian-Pilot building in downtown Norfolk

Come spring Norfolk will no longer have a daily newspaper. Neither will the commonwealth’s largest city, Virginia Beach. Or its second-largest city, Chesapeake.

No matter how The Tribune company tries to spin its boneheaded decision to drag the remnants of the once-sprawling Virginian-Pilot staff to The Daily Press building in Newport News — 26.3 miles away — this will no longer be a paper that’s produced in Norfolk.

You don’t move a newspaper out of its coverage area. Not if you care about covering the news, that is.

Oh, there will still be a daily publication called The Virginian-Pilot, just as there has been for 155 years. But its headquarters will be remote. Worse, tunnel traffic can make the distance between Newport News and Norfolk seem interminable. How exactly are reporters supposed to cover breaking news from across the water?

The publisher is reportedly making tables available at the printing plant in Virginia Beach for any reporter visiting the cities on the Southside and needing a place to work.

Promises made in 2018 when the Tribune company (then called Tronc) bought the Pilot – that there would be no merger with The Daily Press – were quickly shown to be false.

Now Alden Global Capital, a hedge fund that Vanity Fair described as “the grim reaper of American newspapers,” is acquiring control of the Tribune and doing what it does everywhere: taking a chainsaw to the newspaper, stripping it of its value and allowing it to wither.

The solid, imposing four-story Virginian-Pilot building at 150 W. Brambleton Avenue, which opened in 1937, was sold last month for $9.5 million. The newspaper must vacate the premises by April and employees have been waiting to learn their fate.

Yesterday they were told that instead of leasing nearby space for them, the Tribune wants the Pilot staff in Newport News, presumably to fill desks left vacant by senior staffers in that distant Daily Press newsroom.

That sound you hear? Those are champagne corks popping as corrupt politicians and their crooked cronies celebrate. We’ve seen what these arrogant scoundrels will do with a vigilant newspaper on the scene. Imagine what they’ll do when the watchdogs are out of town.

For decades, The Virginian-Pilot was the largest newspaper in the commonwealth and the most entertaining.

The Pilot routinely gobbled up reporting and photographic awards from the Virginia Press Association, leaving our in-state rival, The Richmond Times-Dispatch, in a sad second place.

When I came to work at the paper in 1984 The Pilot had bureaus in Virginia Beach, Chesapeake, Portsmouth and Suffolk. We also had a good-sized operation in Richmond, an office in Washington and bureaus in Raleigh, Ahoskie, Elizabeth City, Nags Head, Hampton and on the Eastern Shore at one time or another.

Our reporters blanketed the military, the statehouse and local cities with superb coverage.

At its peak in the late 1990s, full-time employees in the Pilot newsroom numbered about 298. Layoffs and buyouts began around 2008 and one by one the bureaus closed. By 2014, the most recent year for which I can find a newsroom headcount, there were only 105 workers.

There are far fewer today. And 20 full-time employees just left in the latest round of buyouts.

I was hired 36 years ago as a general assignment reporter in the Virginia Beach bureau. I had a desk in the long-gone Beacon building on Virginia Beach Boulevard, along with about 10 other reporters and at least six editors.

An investigative team out of the Beach office in 1991 uncovered the seamy side of Gov. Chuck Robb’s extracurriculars in the Resort City. Meanwhile, a reporter in Chesapeake won the 1985 Pulitzer for General News reporting for his investigation into a corrupt economic development official in that city. And The Pilot led the nation in reporting on the shocking Walker spy case in 1985.

Virginian-Pilot photographers were among the best in the nation and the paper regularly showcased their work with luscious photo layouts. Our designers were cutting edge and were shamelessly imitated across the country.

We didn’t know it at the time, but those of us lucky enough to be working on this feisty Virginia paper in the 1980s, ‘90s and early 2000s were the last of our kind. The last to experience a newspaper that was profitable. The last journalists to have almost unlimited resources to do our jobs. The last to enjoy the camaraderie of a bustling newsroom loaded with talent, energy, eccentricities and – most importantly – historical knowledge of the area.

The reporters and editors remaining at The Pilot will do their best to cover the three largest cities in the commonwealth – Virginia Beach, Chesapeake and Norfolk – without having a base in any of the three.

There’s only so much journalists can do in an environment where the knotheads running the show are more interested in the bottom line than getting to the bottom of stories.

It’s a sad day for a once-great paper. A sadder day still for the cities losing their daily newspaper.