Next to Be Canceled: the Lewis and Clark Expedition

The culture wars rage unabated in Charlottesville, although the latest excess emanates from City Council, not the University of Virginia. Council plans to seek proposals to remove the West Main Street statue commemorating the Lewis and Clark expedition, which was launched from Charlottesville.

The last I recall from my racist, white-privilege history books, Meriwether Lewis and William Clark led a scientific and exploratory expedition. They didn’t conquer any territory, they didn’t enslave anybody. Indeed, they managed to cross the North American continent with a minimum of conflict with the indigenous peoples.

The problem isn’t with the expedition, per se, as with the rendering of Sacagawea, the Shoshone woman who befriended the explorers and acted as their scout. She is depicted as crouching behind Lewis and Clark in a posture commonly interpreted as tracking. Well, that’s clear enough to any normal person, who grew up thinking of Sacagawea as a heroine who saved the expedition. But not to those who view the world through the prism of racism and oppression.

At some point during the controversy over the Robert E. Lee statue in Charlottesville, attention turned to the Lewis and Clark statue, and those who are easily offended and outraged found themselves, well… offended and outraged. Why wasn’t Sacagawea standing and looking forthrightly ahead like Lewis and Clark? Why was she crouching and looking toward the ground? Wasn’t that somehow demeaning?

The absolute imbecility of this view is impossible to overstate.

Sacagawea’s contribution to the expedition, like Pocahontas’ was to Jamestown, was part of American lore long before the age of politically correct thinking about native Americans. Why on earth would Charles Keck, the artist who created the state or Paul McIntire, the stock broker who donated it to the city in 1919, have included Sacagawea in the memorial if not to honor her? And what could possibly be wrong with highlighting her role as a scout and guide by portraying her examining signs on the ground?

But Charlottesville being Charlottesville, a number of people viewed the statue as offensive. To gin up the verisimilitude of legitimacy for removing the statue — which was tied up in a debate over overhauling the streetscape of downtown Charlottesville — descendants of Sacagawea were brought in to view the statue, and they promptly pronounced themselves dismayed.

As the Daily Progress reported at the time, Rose Ann Abrahamson, a descendant of Sacagawea and a Shoshone-Bannock woman, described her ancestor as “cowering and recoiling.” Of all the statues of Sacagawea she had viewed, and she had viewed them all, she said, “This statue in Charlottesville was the worse we have ever seen.” The status, she added, should become “an object of discussion of America’s intolerant past.” 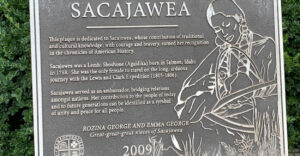 So, who appointed Rose Ann Abrahamson the officials spokesman of the views of the Shoshone people? A “contextualizing” plaque placed by the statue in 2009, which lauded Sacagawea’s contribution, was installed by Rozine George and Emma George, “great-great-great grand nieces of Sacajawea.” Were their views consulted? Did anyone ask them of their interpretation?

Abrahamson is known among the Shoshone for a spin on Sacagawea’s life that is far from universally accepted. Reports the Missoulian back in 2003: “Abrahamson insists that her relative’s name was given her by Lemhi Shoshone elders and means ‘burden,’ a prophesy of the difficult life she led as the wife of an abusive Frenchman and the captive of another tribe. She pronounces the name with an emphasis on the fourth syllable.”

The same article describes the view of another Shoshone woman, Amy Mossett, who, drawing from extensive oral tradition among the Shoshone, had an entirely different interpretation.

Like every ethnic group in American, indigenous Americans have members who subscribe to leftist tropes and worldviews. It is not surprising that the leftists in Charlottesville last year invited Abrahamson — as opposed, say, to Rozine and Emma George, or Amy Mossett — to represent the Indian perspective on the statue and respond with the required offense and outrage.

By removing the statue, City Council is destroying the city’s cultural and historical heritage. For some people, I suppose that’s the point. The past to these people offers nothing of value in a nation conceived in sin. All the old heroes must be de-legitimized and cast aside.

History will not judge these people kindly. One day people will view them as the pillagers and barbarians they are.