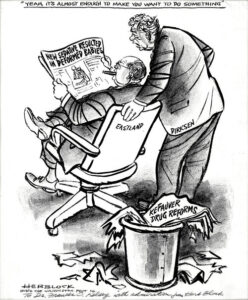 Almost any time I do any public speaking – not often since the pandemic began – a member of the audience will ask something like this:

“What advice would you give to a young person who wants to work in newspapers?”

After I stop laughing, I ask if the young person has a trust fund. If the answer is no – and it’s always no – I say there is no money and no future in newspapers. The young person should learn to code or do something useful, like dog grooming.

That usually gets a laugh. But I’m not joking.

Newspapers large and small are circling the drain. It’s a national tragedy. Here in Tidewater we just found out that both The Virginian-Pilot, where I spent 33 years, and The Daily Press, are now owned by a hedge fund.

Trust me, this is not good news. These skinny publications are about to lose a lot more weight.

We’ll be lucky if they don’t starve to death.

With newspapers from coast to coast on life support, what is the woke crowd fretting about now?

Lack of diversity among political cartoonists.

A piece in The Washington Post by Michael Cavna — self-described as a  “man of many hyphenates” — asked, “Newspaper Cartooning Is Dominated By White Men. Will A New White House Spark Change?”

No, Mr. Cavna, it won’t. Even the mighty Joe Biden can’t save this endangered profession. Cartoonists are the spotted owls of journalism.

In fact, given the rate that newspapers are hemorrhaging money, it’s hard to believe that any daily papers waste resources on cartoons.

Nevertheless, this writer/cartoonist seems convinced that what newspapers really need are more “queer non-binary cartoonists” to put their own special spin on the issues of the day.

Um, I hesitate to point this out, but few professions are more likely to evaporate in the next five years than political cartooning. Where, exactly, will these artists sell their brilliant cartoons once there are only two or three newspapers left?

Oh, and Cavna also believes there should be more women cartoonists.

At the risk of stereotyping, here’s a little secret: Women, on the whole, don’t even look at political cartoons, no matter who creates them. Newspaper publishers know this through surveys of their readers. It was true for decades.

Heck, I don’t like cartoons. Never even glance at them.

When I began working as a lowly copy aide at The Washington Post in the late 1970s, the super-talented Herblock had his office near our station. A little-known fact about this four-time Pulitzer Prize winning cartoonist, the G.O.A.T, was that he was insecure.

He’d wander out most afternoons with a sketch in his hand for the next day’s paper and ask us if we thought it was funny.

It was kind of awkward.

But Mr. Block was a sweet man whose secretary brought us dozens of homemade cookies, so we’d roar with laughter. Weird thing is, the guys seemed to actually enjoy his cartoons. The females? Not so much.

Come to think of it, Herblock was the definition of woke when he was in his prime. He skewered Eisenhower for not being tougher on McCarthyism and Richard Nixon for being so damned corrupt. He went after George Wallace, Huey Long and J. Edgar Hoover. He took on Bill Clinton and George W. Bush. No female or hyphenated cartoonist could have launched better zingers at the powerful.

American newspapers have a million problems. Lack of diversity among the few remaining political cartoonists isn’t one of them.