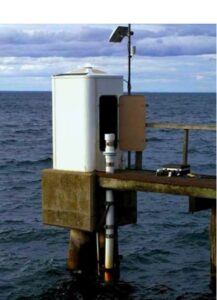 Aquatrak wave and tidal sensor. Not sure if these are used in VA.

The latest projection from the ever-trustworthy federal authorities sweating out the climate crisis is that the sea level will rise one foot along Virginia’s coast by 2050, rising the same amount in 30 years as it rose in the previous 100.

The news quickly swept across the Commonwealth. Here is the Richmond Times-Dispatch’s take and here the Norfolk Virginian-Pilot (both firewalled, sorry.) And The Washington Post.

What do the stories fail to mention? That this is a far less dire prediction than the ones distracted news consumers are usually fed. Governor Ralph Northam’s administration prepared a climate adaptation report last year that assumed 2.2 feet of rise by 2050, and almost seven feet by 2100. I wrote about it on Bacon’s Rebellion in August. The higher prediction of almost seven feet is also cited in a lawsuit against the state reported previously.

Even this more modest prediction is still incredibly unlikely. Nothing has changed with the actual measurements of the slow but steady rise in relative sea level, the focus of the earlier-cited article I did with Kip Hansen. For the new prediction from the National Oceanic and Atmospheric Administration (NOAA) to come to pass, those measured rates will need to double or triple promptly.

The Sewell’s Point gauge in Norfolk has been measuring less than 5 millimeters (0.2 inches) of annual relative rise, due to actual sea level rise combined with the well-documented sinking of parts of the Virginia coast. It will have to accelerate to more than 10 millimeters of annual relative rise to match this prediction.  Assuming the land subsidence is steady, the sea level rise component may need to accelerate by four or five times to hit the prediction.

One great thing about this prediction is we can keep checking to see what happens. If it is wrong, a few more years of data will reveal the error. These types of predictions have been failing for 30 years now, then are forgotten and replaced.

NOAA’s most recent report, an update from five years ago, is attractively packaged with graphics, including the logos of all the other federal agencies that tied their reputations for accuracy to this palm-reading exercise (what, not the CDC?) In the summary, the federales predict a full two feet of rise by 2100, but add that “failing to curb future emissions could” (could) increase that to between 3.5 and 7 feet.

The Richmond paper went right for the dire prediction and gave readers (online, at least) a photoshop illustration of a well-known Gloucester bridge surrounded by the results of a five-foot sea rise. Apparently, looking at the credit line, our federal taxes have funded a computer program that creates these illustrations for media use.

At its measured rate of relative rise (also in the August story), Gloucester Point is 375 years away from a five-foot sea level rise. But the incautious reader will see that fake photo and think it reflects 1) a firm government prediction for 2) perhaps just 30 years away.

How can they get away with this? Models and a gullible public. The tidal gauges have a long history in many locations, but that data is now supplemented with “reconstructions.” Now satellites are used as well, satellites which reportedly are accurate in centimeters, not millimeters. After much massaging, satellite data indicates sea level rise of about 3.4 millimeters per year (about 90 years to rise a foot), but isn’t the measurement on the shore what matters to us?

That the sea has been rising for centuries, since the last ice age, is not in dispute.  What is in dispute, hot dispute, are claims that it is accelerating, it is doing so because humans burn fossil fuels, and it will accelerate to the point of catastrophe in a very short time. All the dire claims assume acceleration.

What is also not in dispute is that Virginia is unprepared for the storms and flooding we already get and can continue to expect. Making your adaptations or mitigation plans based on some of the more dire scenarios could be justified, but abandoning your gasoline-powered car or natural gas furnace will have zero impact.

This is an orchestrated media campaign. It was no accident that earlier this week, during the Olympics, the Ukrainian crisis and the COVID pandemic, a national news network led its evening broadcast with a weather story about a typical winter storm. They are selling alarmism on weather just as they did on COVID.

The Thursday RTD included a standard weather forecast story, supplemented by a long section claiming that rainfall here is increasing, with the author citing data from his former employer, Climate Central. The online version again is supplemented with graphics.

My favorite sentence? “The analysis is limited, but it does fit with the scientific expectations of a warming climate.” Would the newspaper print it if it didn’t? All the news that fits…

(AP) — The Associated Press said Tuesday (Feb. 15) that it is assigning more than two dozen journalists across the world to cover climate issues, in the news organization’s largest single expansion paid for through philanthropic grants. The announcement illustrates how philanthropy has swiftly become an important new funding source for journalism — at the AP and elsewhere — at a time when the industry’s financial outlook has been otherwise bleak. (Full AP story here.)