Mayor Stoney and His Left-Wing Critics 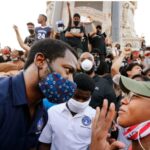 Richmond Mayor Levar Stoney published an op-ed in the New York Times a few days ago defending his actions last summer during the tumultuous protests and riots  following the George Floyd killing. I was thinking of writing a post this morning critiquing the piece from a conservative perspective. But then I read an analysis in the Richmond Times-Dispatch blasting Stoney from a left-wing perspective, and I found that more interesting.

While Stoney has adopted social-justice rhetoric the past year, by the standard of City of Richmond electoral politics, he is a centrist. During his mayoral re-election campaign last year, he had strong, credible challengers from both the right and left, and he threaded a narrow needle between backing the protesters’ social justice causes while also trying to maintain a semblance of public order. In his NY Times editorial, he focused on his role in removing 14 pieces of Confederate “iconography” from city property and working for racial justice, while apologizing for the “unintentional” release of tear gas during one of the demonstrations.

The mayor has been criticized from the right for allowing protesters to gather unmolested for months in a virtual police-free zone around the Lee Statue on Monument Avenue even as they harassed and terrified nearby residents. But that was never a consideration for RTD reporters Ali Rockett and Chris Suarez in their take-down of the Stoney column.

In trademark RTD fashion, the reporters maintained a veneer of objectivity by not inserting overt editorializing into their narrative. Rather, they framed a left-wing narrative, entirely ignoring conservative perspectives while quoting only left-leaning critics. In so doing, the RTD revealed the political sensibilities of its news staff as being to the left of the liberal Stoney and aligned with radical elements of the Richmond electorate.

Framing and sourcing. The RTD billed the piece as an analysis of what Stoney “left out” of his NY Time column. The authors focused on the tear gassing of protesters, evolving explanations of that incident, and what they claim was Stoney’s failure to take accountability for what transpired. “The mayor’s critics say he …. focused instead on removing the city’s Confederate monuments as protesters, subjected to near-nightly volleys of chemical agents, demanded police reform.”

“I think it’s appropriate to be upset about that kind of narrative reduction,” the RTD quoted Richard Meagher, a political science professor at Randolph-Macon University who studies local politics. “I can understand him wanting to tell a story about these protests that are kind of simplified and makes him the hero, but it’s hard for the people who lived through that time to accept his version of events.” (Meagher’s academic research focuses mainly on the role of the “Christian Right” in the Republican Party.)

The RTD also quoted Kalia Harris, co-executive director of the Virginia Student Power Network, as describing the Stoney account as “revisionist history” that obscures how protesters were harmed by police in last year’s events. “You can ask almost any protester who went out at any time last year. They would have a story about the trauma they suffered.” (The Virginia Student Power Network is dedicated to social justice activism.)

The article then provides context to several claims in the mayor’s opinion piece. It refers to tear gas as “chemical munitions” and reminds readers that Richmond police reported using force 94 times during the first 29 days of protests. The article also notes that 300 people were arrested during the protests, while two police officers face charges.

But there are a few facts that the RTD “left out” of its contextualizing of Stoney’s op-ed. There was no mention of incidents of arson, smashing of windows, spraying of graffiti, intimidation of public officials in their homes, assaults on bystanders, shooting of guns in the air, and harassment of residents near the Lee Monument by the “mostly peaceful” protesters. Police actions had a “context,” too.

Civilian review board. The protests have died down. The vast majority of arrested protesters have been released. As the COVID-19 epidemic recedes, life in Richmond is returning to something resembling normal. As evidenced by the RTD fixation on the tear gassing incidents suggests, however, the political battle continues. Now that all but one piece of Confederate iconography has been removed, the Left wants to hold police accountable for their actions.

The city is creating a civilian review board to ensure that accountability. However, the process has bogged down in controversy. Stoney has declared that the task force appointed to create that review board “lacks clear direction, leadership, and collaboration with the administration” and is “out of compliance.” The RTD declares that Stoney “undermined” the task force, noting that the police chief he appointed did not respond to the task force requests to return phone calls until called out on Twitter — in effect siding with Stoney’s left-wing critics and hewing to their criteria for judging his actions.

This entry was posted in Culture wars, Media, Police reform and tagged James A. Bacon. Bookmark the permalink.