Masters of Hype and Puffery 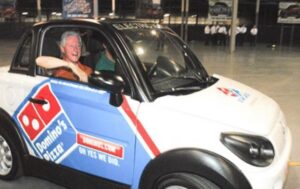 Former President Clinton at the GreenTech “pilot plant” in July 2012.

This is the fifth in a series of articles about Terry McAuliffe and GreenTech.

On July 6, 2012, GreenTech Automotive launched the rollout of the “all-American” MyCar electric vehicle at a ceremony attended by former President Bill Clinton, the governor of Mississippi, the assistant secretary of Homeland Security and, as described by local media, “an overflow crowd.”

It was a festive occasion. Clinton lauded company chairman Terry McAuliffe and former Mississippi Governor Haley Barbour, a Republican, who was also in attendance, for overcoming their political rivalries and delivering a tremendous manufacturing project for the state of Mississippi.

McAuliffe, too, was upbeat. “For too long, America has been inventing products here and sending the production jobs overseas,” he said. “But … we’re proud to bring manufacturing jobs back and prove that the U.S. is still the world leader in technological innovation and manufacturing.”

The day before, McAuliffe had told the New York Times that he thought the company could produce 10,000 cars in 2013. He quoted an $18,000 price tag for a top-of-the-line MyCar, with less capable versions selling for less, implying potential revenues in the realm of $150 million. During the ceremony itself, he announced big news: Domino’s Pizza Inc. would exclusively use the MyCar to deliver pizzas in 10,000 locations across the U.S.

Photographers snapped pictures of a grinning Clinton toodling around the cement floor of the pilot plant in a MyCar decked out with the Domino’s Pizza logo. Other photographs showed GreenTech employees industriously working on an assembly line of MyCars. 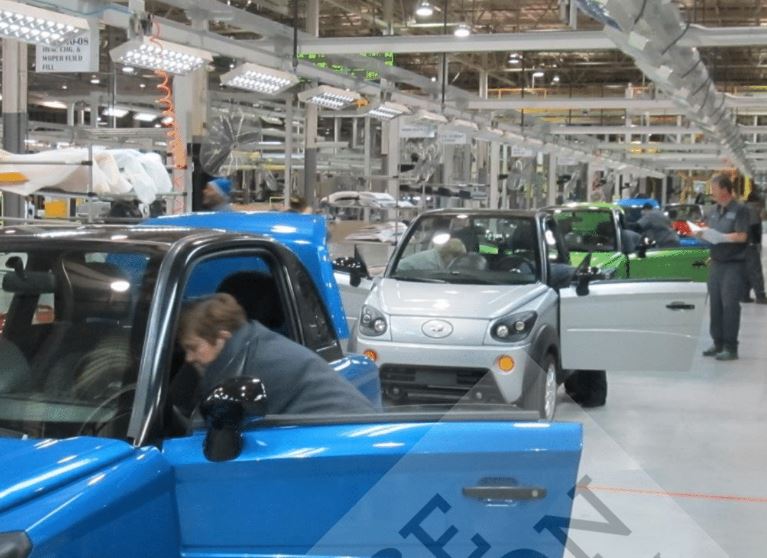 Both photos appeared a few months later in a private placement memorandum aimed at Chinese investors in which a $500,000 investment under the EB-5 program would qualify them for a U.S. green card and buy them a piece of GreenTech. GreenTech was hoping to raise $60 million, and the images created the impression of GreenTech as a company with big contracts rolling in and production ramping up on the factory floor.

According to the offering memorandum, Domino’s had showcased MyCar to more than 6,000 franchises attending the company’s worldwide exposition in Las Vegas. “Based on our subsequent discussions with Domino’s franchise owners, we expect to sell the MyCar to Domino’s franchise owners in the United States, Europe, Australia, and the Middle East,” stated the document. Meanwhile, GreenTech also was targeting Europe as a significant market for small “green” vehicles.

At the same time, the offering memorandum said, the company was forging ahead with plans to ramp up production. Output at the pilot plant would continue until construction on the main facility in Tunica County, Miss., with an initial capacity of 50,000 cars, was complete in 2014. At that point, the memorandum said, “we will select an appropriate time to shut down production at the Pilot Production Facility and move equipment and inventory and other movable assets to the Facility.” During the transition period, the memorandum cautioned, GreenTech “may have no revenue.”

The inescapable implication, not stated outright, was that GreenTech was producing cars and was generating revenue.

There were just a few problems.

The deal with Domino’s sputtered out. The day after the ceremony GreenTech told InsideEVs that Domino’s would buy “at least 20 vehicles.” No more was heard of the deal. The offering memorandum did not mention that.

The “pilot plant” was a Potemkin Village, all show and no substance. Cars weren’t rolling off the assembly line. There was no backlog of orders to fulfill.

Born in hype. By the time the offering memorandum was published in March 2013, McAuliffe was no longer listed as chairman, just “chairman emeritus.” Running for governor in the state of Virginia, he no longer played a day-to-day role in the company, but he, with partner Charlie Wang, had called the shots up to the July 2012 MyCar rollout and several months beyond.

None of the owners or senior executives had any experience in the automobile industry. They had no capital, other than modest sums they might have invested themselves (there is no record of how much that might have been) and the sweat equity they put into the business. The prototype car they had purchased from a Chinese company did not meet U.S. regulatory standards. The company had no sales. It had no distributors. It had no manufacturing capacity. It had no meaningful intellectual property. The partners had nothing but a plan to use the EB-5 program to entice Chinese citizens to invest $500,000 each in the hope of getting a green card and perhaps making some money in GreenTech.

What the partners lacked in tangible assets, they made up for with big dreams. The first offering memorandum spun a vision of building a fast, nimble enterprise capable of exploiting a niche for energy-efficient vehicles that the established automobile manufacturers had neglected. So vast was the market potential that they aspired eventually to manufacture a million cars a year and generate revenue of $33 billion. In subsequent presentations, those projections were scaled back, but GreenTech executives always insisted that big success was just around the corner.

GreenTech adopted a fake-it-until-you-make-it business strategy. Gin up enthusiasm, raise money from Chinese investors, use the proceeds to make progress in building a viable enterprise, tout modest milestones as indicators of great progress, and go back to the Chinese money well. The nature of the EB-5 program added to the pressure. The purpose of the program was to create jobs. If GreenTech couldn’t demonstrate that it was creating jobs, the well would run dry. The job-creating imperative became even more important after the state of Mississippi and Tunica County, Miss., extended $6 million in incentives on the promise that the enterprise would create 350 jobs.

If GreenTech couldn’t actually create jobs, the principals had to make it look like job creation was just around the corner.

A 2013 document noted that GreenTech had “accumulatively created more than 140 direct employment opportunities in the United States.” What was an “employment opportunity?” Apparently, the phrase included part-time workers, terminations and layoffs. A state of Mississippi audit found that the company was maintaining no more than 94 full-time jobs in Dec. 31, 2015.

McAuliffe, who had been a high-ranking operative in the Clinton political machine, was a pro at generating publicity. He was enthusiastic and flamboyant, comfortable bounding onto a stage and speaking off the cuff, and adept at dishing out quotable quotes in media interviews. He knew how to build a narrative that played to the press — America manufacturing is back! American know-how would reverse the exodus of U.S. manufacturing jobs overseas! Not only would GreenTech create jobs, it would create green collar jobs! GreenTech would help fight global warming!

He also had a habit of putting a wildly optimistic spin on every new business development — often prematurely.

A profusion of confusion. Chinese investors who later sued McAuliffe, Rodham and Wang cite several of McAuliffe’s false statements in media interviews in 2011 and 2012.

Then there was this from a February 2011 interview on “Politics Matters”:

We went to China in 2010. We bought one of their largest electric car manufacturing companies, we moved the entire operation — the entire company — to the United States of America. We took jobs from China and moved them here to America.

Several problems. First, EuAuto was based in Hong Kong, not China. Second, terming it “one of the largest electric car manufacturing companies” was a stretch. It was a small business. Third, according to an article in a Hong Kong newspaper, The Standard, GreenTech had about 60 employees working on MyCar at its plant in Dongguan, China. EuAuto’s chief executive told the newspaper that Dongguan would be expanded to boost production capacity which currently stood at 1,000 cars per year. Elsewhere, GreenTech referred to leasing a Dongguan facility as a “delivery point for the sourcing of supplies to China.” Apparently, the idea was for EuAuto to serve the European market, but we could find no clear explanation, so that remains unclear.

When they weren’t making baffling statements and outright misstatements, McAuliffe and GreenTech were engaging in hyperbole and exaggeration.

Most fanciful of all, McAuliffe said GreenTech had made a deal with Domino’s Pizza to sell MyCars to the company’s 10,000 franchises across the globe. In point of fact, that resulted in the sale of a grand total of 20 cars.

The Tunica County manufacturing plant opened for production in October 2015. Employees recounted to media that they didn’t have much to do. They were there for show. Federal records obtained by the Roanoke Times in 2016 indicated that GreenTech manufactured just 25 cars. None were sold. The company became mired in lawsuits, Mississippi wanted its money back, its credibility in the U.S. marketplace was totally shredded, and the company filed for bankruptcy in 2017.

By then, Terry McAuliffe was long gone. Elected governor of Virginia, he had left the company in late 2012, promising to sell his ownership stake. But he never divested himself of his brash, loose-with-the-facts rhetorical style, which has been amply on display during the 2021 gubernatorial campaign.

This entry was posted in Business and Economy, Entrepreneurialism, Scandals and tagged Carol J. Bova, Greentech. Bookmark the permalink.