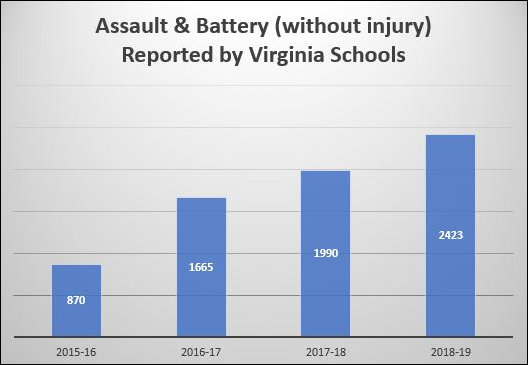 For the past several years, the Virginia Department of Education has aggressively pushed a “restorative justice” approach to school discipline. Instead of relying upon traditional punishments like suspensions, teachers and administrators employ a dispute resolution process that appeals to the offending student’s reason and empathy.

How well is restorative justice working? One way to tell is by consulting the Virginia Department of Education’s Safe Schools Information Resource, a searchable database that records a wide range of disciplinary infractions, from assault & battery to bomb threats, from vandalism to bringing handguns to school.

It had not occurred to me to check this data until the House of Delegates and Senate passed HB 257, which, according to its legislative description, would remove the requirement that school officials refer to law enforcement such crimes as “assault or assault and battery.” The purpose of keeping law enforcement out of the picture is to cut off the so-called “school to prison pipeline” in which students committing crimes land in jail where they will only fall further behind academically and become even more likely to drop out of school.

While many Republicans voted along with the Democratic majorities in both houses, the main opposition came from other Republicans. House Republican Leader Todd Gilbert, R-Shenandoah, issued a statement in response to the bill’s passage: “House Democrats today adopted a policy that will make our students, teachers, and school personnel significantly less safe. Administrators should have some leeway over when to involve law enforcement in disciplinary problems — but instances of sexual battery, stalking, and threats and against teachers and staff are not ‘discipline problems.’ They are serious crimes with real problems that need to be investigated and prosecuted.”

Failure to report serious crimes is the same type of policy that allowed the Parkland, Fla., shootings to take place, Gilbert said. “This law will make our students less safe.”

In a word, the Democrats’ philosophy for dealing with criminality is to decriminalize crime. And the predictable result is rising disorder in schools. Increasingly, Virginia schools are not only “gun free zones,” they are becoming “discipline free zones.”

I have not undertaken an exhaustive analysis of the data, but I have compiled the numbers for one key indicator — the number of assault & battery (no injury) incidents reported — which serves as a rough proxy for disruptive behavior as a whole. The trend line is startling. The number of incidents has nearly tripled in just three years — from 870 in 2015-16 to 2,423 in 2018-19. (This data excludes districts that reported fewer than 10 incidents, in which case the numbers were suppressed to protect student privacy.)

The increase is all the more remarkable given the fact that the institutional incentives are to suppress indicators of deteriorating discipline and to “down code” incidents (give them a less serious classification or not to report them at all).

At the very least, one can argue that the General Assembly has no business curtailing referrals to law enforcement without understanding the impact on school discipline. The legislators’ action, it is safe to say, is driven by ideological conviction. Facts? We don’t need no stinkin’ facts! Most of those who suffer, of course, will be students whose classroom teaching is disrupted.