In General Assembly action yesterday, Democrats spiked a slew of Republican bills to relax gun laws and debated a so-called “red flag” law that would allow authorities to remove firearms from persons deemed “a substantial risk of injury to himself or others.”

The operating supposition behind Democratic gun-control initiatives is that gun violence is a huge problem in Virginia. Given the mass shooting at the Virginia Beach municipal center last year, plus ongoing chronic violence in inner-city jurisdictions such as Richmond, Petersburg, and Portsmouth, it is understandable that people would harbor that perception.

But the reality is that Virginia is one of the least violent states in the country. To be specific, according to data published in USA Today, the violent crime rate in Virginia is 4th lowest of the 50 states. Only in three small, predominantly rural states in New England is the crime rate lower. Compared to other states with comparable demographics — racial/ethnic mix, concentrations of urban poverty, Southern culture, and the like — Virginia’s violent crime rate is startlingly low. 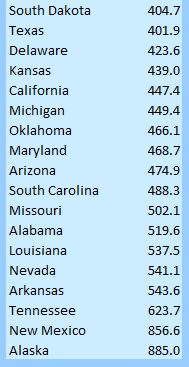 Perhaps it would behoove us as a Commonwealth to understand why we’re different and what we’re doing right before we run off and, driven by a hysterical national debate whipped up by national media who know nothing about Virginia, enact a passel of laws that may or may not be suited to the realities here in the Old Dominion.

I know, I know, ignorance never stopped the General Assembly from passing laws before, so it’s unrealistic to expect the new Democratic majority to acknowledge the limits of its knowledge and understanding any more than their Republic predecessors did.

But as citizens, we should ask: To what does Virginia owe its low rate of violent crime? Certainly not strict gun controls. The Cliffords Law Center, which is dedicated to preventing gun violence, publishes an annual gun law scorecard. Virginia rates a D. Maine, with the lowest violent crime rate in the country, rates an F, as does New Hampshire (3rd lowest). Vermont, second lowest, rates a D+. California, which rates an A, ranks 37th. Maryland, which rates an A-, ranks 40th. There is virtually no correlation between the strictness of gun-control laws and the rate of violent crime. If anything, some have argued, the correlation is negative.

So what public policies do make a difference? One possibility is the rate of incarceration — not for the population at large but of violent criminals. If bad guys are locked up inside jail, they aren’t committing crimes outside of jail. Among the low violent-crime states, Virginia has the highest rate of incarceration. Convinced that Virginia’s high prison population reflects institutional racism, Democratic legislators want to reduce the numbers. That approach may be entirely appropriate when it comes to decriminalizing non-violent crimes such as marijuana possession, which effects African-Americans disproportionately. But General Assembly Dems and the Northam administration want to extend leniency to so-called “geriatric” prisoners as young as 50, even if they have committed violent crimes.

Virginia also is notable for having the lowest prison recidivism rate in the country. Clearly, the Old Dominion is doing a better job — through prison policies and nonprofit efforts — of reintegrating prison inmates into mainstream society. That may be a contributor to the low violent crime rate. Instead of returning to their old criminal ways, convicts learn how to lead productive lives. It would seem worthwhile to dig deeper and find out more. Conceivably, we would get the most bang for the buck by focusing more resources on reducing recidivism.

Another angle worth looking at is to identify where the gun crimes are taking place. Violent crime is low to non-existent in most rural and suburban counties in Virginia. According to CountyHealthRankings.org, Bath County had a violent crime rate of 29 per 100,000 population during that period, while, at the other extreme, the rate was 631 per 100,000 in the City of Richmond. Should Richmond’s violent crime issues drive statewide policies that apply to Bath?

Violent gun crimes are primarily (though not exclusively) an urban phenomenon. Perhaps, instead of passing blanket laws affecting all citizens, we should be asking ourselves how the bad guys get guns. In many cases, I believe, they steal the guns — or buy guns from others who have stolen them. Perhaps we should focus efforts on tracking and reclaiming stolen guns.

I’m no expert on gun-control/gun-rights issues, and I don’t purport to know the answers. But I can observe the quality of debate taking place in Virginia, and it is extremely low. People are quoting national talking points and citing national data (if they cite data at all) and ignoring the factors that make Virginia distinct. We can do better.

This entry was posted in Culture wars, General Assembly, Gun rights and tagged James A. Bacon. Bookmark the permalink.