I Guess I Called that One Wrong 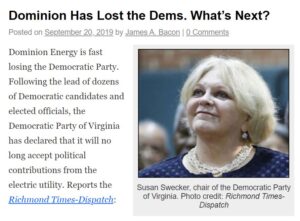 Steve Haner likes to yank my chain every so often, and he did so this morning — digging up my 2019 prognostication that Dominion Energy had lost the Democratic Party in Virginia. At the time Dominion was still committed to natural gas and the Atlantic Coast Pipeline, and opposition to the proposed gas pipeline had become a Democratic Party rallying cry. The Clean Virginia advocacy group was extracting promises left and right from progressive Democrats to reject Dominion campaign donations.

Well, the ACP is history, Dominion pivoted hard and embraced renewable energy, and now the power company is favoring Democrats with its donations to electoral campaigns and Political Action Committees. As Steve recently highlighted here, Democrats are happily taking the money.

So, is it time now to write the headline, “Dominion Has Lost the GOP. What’s Next?”

Not so fast, says Steve. He thinks Dominion can cobble together a bipartisan coalition of Dems and Repubs willing to carry its water. Environmentalist purists may continue to scorn the utility’s money, as might conservative foes of the Virginia Clean Energy Act, but there are plenty of politicians in the House and Senate who are happy to play along. Counting noses is Steve’s expertise, not mine, so I’ll accept his judgment.

But I did get one big thing right in that story: “In a Democratic-controlled General Assembly, you can be sure that environmentalists will ratchet up their demands — such as accelerating the goal, announced recently by Northam, of achieving a carbon-free electric grid by 2050.”

Oh, please, Br’er Fox, don’t throw me into that briar patch! From Dominion’s perspective, who needs gas pipelines when you can build wind farms, solar farms, transmission lines, and redundant backup systems instead — and charge it all to the ratepayers?

Now Terry McAuliffe has promised to accelerate the 2050 deadline for a net-zero grid. If Dominion is backing McAuliffe for governor, you can be sure that its strategists have calculated they can make money by accelerating the adoption of wind and solar. Ratepayers might not be happy when the bills come due, but the consumer movement that once railed against spiking electric bills in the bad ol’ VEPCO days no longer exists.

This entry was posted in Politics and tagged Dominion, James A. Bacon. Bookmark the permalink.