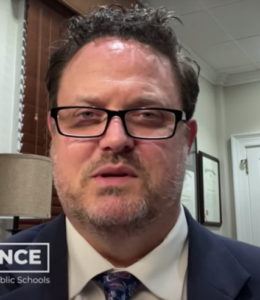 In his “Deskside Chat” yesterday, Virginia Beach public school superintendent Aaron Spence spoke about teachers as if they’re toddlers in need of naps.

Let’s review: Thanks to Gov. Ralph Northam, Virginia was the first state to close schools through the end of the 2020 school year, leaving children and parents scrambling to figure out how “remote learning” would work.

Instead of throwing open school doors in the fall, Northam set rules so onerous that most could not reopen and some schools stayed virtual almost until the end of the 2021 school year.

Unsurprisingly, standardized test scores plummeted. At the Beach, the pass rate dropped by 19% from pre-pandemic SOLs.

Now here we are. Kids are back in school, wearing masks all day, distanced from their classmates and friends, eating silent lunches, being quarantined if it’s suspected they were within 3 feet for 15 minutes of a student testing positive for Covid.

Insanity. All of it.

Now this: Beach teachers, who’ve so far had in-person instruction for a whopping 37 days, are so “burned out” that the Virginia Beach School Board voted to make Wednesdays halfdays beginning November 17.

And parents? Those people trying to earn a living who don’t get to claim burnout to score halfdays? The heck with them.

They’ll just have to scramble for childcare on Wednesday afternoons now that the school board has thrown a monkey wrench into the school schedule.

In his “Deskside Chat” yesterday, Beach Superintendent Aaron Spence spoke about teachers as if they’re toddlers in need of naps.

“Many have told me they’re exhausted and burned out and it’s only October,” said the sad, scruffy superintendent.

He said teachers were “overwhelmed” in these “trying times” and that he needs his employees to “take care of themselves.”

Here’s an idea, Spence: Take care of the kids.

During last year’s virtual school teachers didn’t teach on Mondays. That was set aside for “planning” time. It was an open secret that teachers were getting their hair done, taking long weekends and otherwise enjoying their day off.

Now they need Wednesday afternoons, too.

Then again, who cares about the students? The governor doesn’t care about them. He closed their schools and at the behest of teachers unions made it nearly impossible to reopen them. The General Assembly certainly doesn’t care about kids, they passed HJ257, which allows principals to keep secret crimes committed in schools.

School boards? LOL. They forced kids into soggy cloth masks despite ample evidence that they do nothing to prevent the spread of the virus.

Parents still care. But they feel helpless. When they want to protect girls from boys in bathrooms and locker rooms they’re called transphobic. When they object to pornography in school libraries they’re accused of book burning. When they protest at school board meetings they’re called domestic terrorists.

If parents come out and vote next week, they can begin to reverse this Virginia trend of Kids Last.