How Much Will This Bill Cost? 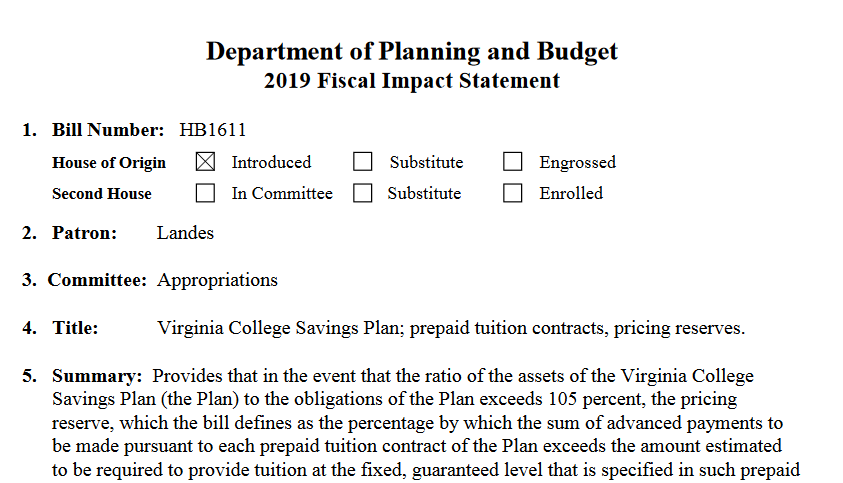 With the 2020 General Assembly opening this week, it seems like a good time to talk about fiscal impact statements (FIS). Admittedly, FIS are a more mundane subject than the hysteria over gun laws, but they are important in understanding many introduced bills. This post will cover FIS for general legislation. There are specific requirements and a separate process for bills that may result in the need for additional prison beds. This separate process will be the subject of a subsequent post.

Although there is no legal requirement that it do so, it has long been accepted that the Department of Planning and Budget would provide estimates of the fiscal impact of proposed legislation. Preparing FIS and overseeing the process is one of the major functions of the agency and consumes a tremendous amount of staff time. After a FIS is completed, DPB submits it to the Legislative Information System, where is accessible to the public through a link on the main LIS page for each bill. A new FIS is typically prepared for each version of a bill as it moves through the legislative process.

It is important to note that the FIS is not intended to be, and should not be, an analysis of the policy pros and cons of the legislation. It is an objective statement of what the bill does and a projection of the fiscal ramifications of the policy changes proposed in the legislation. The function of the FIS is to provide legislators as much fiscal information as possible as they consider whether a proposed bill should be enacted.

The FIS can be an important factor in determining the fate of a bill. The projected cost of a bill can be used by its opponents as additional ammunition in their efforts to kill it.  Similarly, projected increases in revenue or savings can be used by the advocates of a bill to help advance it.

For the FIS process to be useful, it must be credible. Legislators must feel that the estimates are reasonably accurate and have not been influenced by political considerations. It has long been the culture among DPB analysts to produce FIS that are as accurate as possible, given the time-frame in which they have to work, and are free of political, or personal, bias. If a bill is strongly favored by the Governor (or the analyst), but has a high price tag, then, so be it.

There are a lot of bills which qualify for a FIS and the deadlines are tight.  For most bills, DPB analysts must rely on the affected agencies to provide the information needed for the FIS. In some cases, agencies will overstate the fiscal impact of legislation. Sometimes, they may not like a bill and hope to kill it with a large fiscal impact. In other cases, they may be hoping to use the bill to get some additional funding from the legislature. It is the task of the DPB analyst to sift through the agency claims and data and develop a fair, realistic estimate of a bill’s fiscal impact and to set out in the FIS the data and assumptions upon which that estimate is based.

Based on the general attitude of legislators, it seems that DPB has maintained the credibility of the FIS process. Certainly, legislators may grumble some or express consternation if one of their bills is assigned a large fiscal impact. But, after they understand DPB’s rationale, they usually accept it.

There is an avenue for an appeal of sorts. It is the policy of the Joint Legislative Audit and Review Commission (JLARC) to analyze the fiscal impact of a bill upon the request of the chair of a standing committee. Therefore, if individual members are really dissatisfied with the FIS produced by DPB, they can ask their respective committee chairs to request a JLARC review.

JLARC receives few such requests. In 2018, there were 12 requests, which was a relatively high number. In 2019, there were five requests, which was about normal. In both years, the results were about evenly split. In 2018, JLARC concurred with DPB on 6 of the 12 bills in question; in 2019, it concurred on 3 of the 5. It should be kept in mind that JLARC staff have more time to work on these analyses and gather data than do DPB analysts usually have.

Although DPB prepares FIS for most legislation that is likely to have a fiscal impact on the state, other agencies prepare the FIS for specialized areas. DPB has delegated to the Department of Taxation the responsibility for FIS on bills related to taxes. In addition, state laws direct the following agencies to prepare fiscal impact statements: