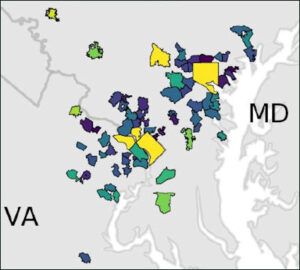 Competitive intensity of the homebuilder industry in the Washington-Baltimore area, 2006. Yellow indicates where 6 or more firms account for 90% of construction, dark blue indicates only two firms.

What is driving up housing prices in Virginia, especially Northern Virginia? In the simplest terms, the increase can be explained by a sustained imbalance in supply and demand. Between population growth and rising incomes, the demand for new dwellings is outpacing the supply of new dwellings built. Then the question becomes, what is restricting supply?

My commentary on this blog has emphasized the role of local zoning codes, comprehensive plans, and NIMBYism in restricting the density of development where demand is greatest, in and near the urban core of Virginia’s major metros. But Jacob Cosman and Luis Quintero with the Johns Hopking University business school point to a different, though related, phenomenon: The consolidation of the home building industry. 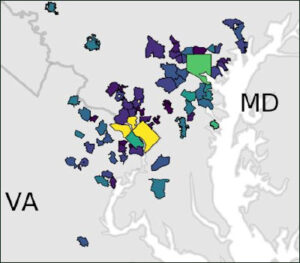 Intensity of competition in 2015. Source:Cosman and Quintero.

“Our empirical results indicate that a higher degree of concentration in local housing construction markets leads to less housing production, a decreased rush to build more units, and greater volatility in prices,” conclude the authors in their paper,  “Fewer players, fewer homes: concentration and the new dynamics of housing supply.“

The increase in market concentration (as measured by the number of home builders accounting for 90% of construction in local markets) between 2006 and 2015 led to the production of 150,000 housing units per year nationally. Without the home-builder consolidation, the authors estimate, housing increases would have averaged 2.4% annually instead of 5.5%.

How does decreased competition result in fewer houses built? The authors explain:

The real estate market cycle is driven by firms competing to build quickly to satisfy unmet demand and gain a first-mover advantage in a growing market. Interfirm competition generates a rush to build. As the number of market participants increases, this can result in overbuilding.

In a competitive capitalistic market, developers must speculate and start the process of planning development or building new products earlier than the actual demand materializes to edge out other developers who also want a share of the market. In the absence of collusion, this speculative behavior, along with the lump nature of real estate product, makes it easy to overshoot actual needs.

These findings demand yet another explanation: What is driving the consolidation of the home building industry? Write Cosman and Quintero:

Some of these advantages — in-house design capability, brand-name recognition, the ability to offer financing packages to consumers, and the ability to purchase materials in bulk — are not new. Those advantages have always existed. Therefore, they cannot account for the increased competitive advantage of large home builders since 2007. What has changed, I would argue, is the intensity of environmental and land use regulations, and the difficulty in getting permits to build new housing in localities where the demand for housing is the strongest.

Emily Hamilton with George Mason University’s Mercatus Center has documented the wave of new “inclusionary zoning” policies enacted by localities in the Washington metropolitan area since the 1990s. 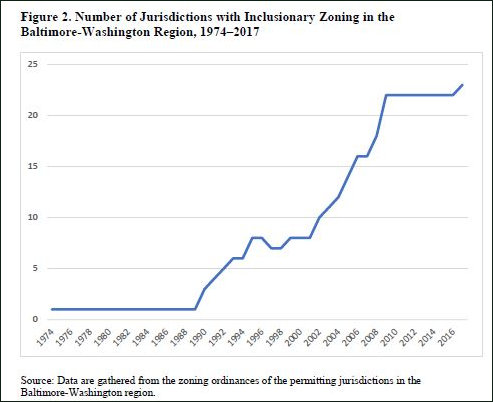 Inclusionary zoning is only one category of local environmental and land-use regulation. There have been many others. One can have a conversation as to whether these added layers of regulation are justified or unjustified, but there can be no argument that they have occurred. Over time, the increased regulatory burden and increased difficulty in acquiring new lots to build on, has I would argue, has favored large firms with patient capital and in-house staff capable of navigating projects through the zoning process and inevitable NIMBY resistance.

In other words, when we’re looking for root causes of the consolidation of the home-building industry in the Washington region (which can be seen in the two maps atop this post), the most likely culprit is the proclivity of state and local government to impose layer after layer of new land-use restrictions and regulations.

Cosman and Quintero have added insight into the complex process by which increased regulation affects housing markets, restricts supply, and pushes prices higher. But let there be no doubt where the problem originates.

This entry was posted in Housing and tagged James A. Bacon. Bookmark the permalink.