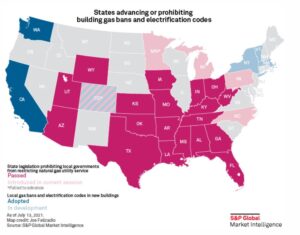 States in blue have seen localities restrict or ban natural gas in homes and businesses, and those in red have preempted the push by banning such bans. From S&P Global Intelligence story linked below.

Maybe not today or tomorrow, but soon the War on Fossil Fuels will be fought in the equipment room or garage of your house. A push to prohibit new natural gas connections and remove existing home gas services is inevitable if Virginia’s current leaders are serious about zero carbon within 20 to 30 years.

Refitting a home with natural gas appliances to all-electric, the dream of some utilities who need not be named, is likely to cost well over $20,000. That figure has been helpfully compiled in a state-by-state analysis by the Consumer Energy Alliance (CEA), with a fact sheet specifically on Virginia.

An energy ban could cost as much as $26,132 for a Richmond household to retrofit existing appliances. depending on the appliance models, home configuration, labor, and reliance on natural gas. These findings dovetail with previous CEA research that found that the cost to replace major gas appliances in homes nationwide would be more than $258 billion. Further, as the report shows, a tremendous amount of new transmission infrastructure will need to be built at significant cost to Virginians to meet the demands to “electrify everything.”

One third of Virginia’s homes use natural gas for heat. The largest part of the conversion expense would be replacing gas heat with electric, which CEA estimated would cost $20,000 (and with all the labor and if you need ductwork, it could).

Then the CEA review adds in the cost of an electric hot water heater and range, plus the cost to upgrade your electric service to at least 200 amps. That decorative gas log fireplace in the family room? Forget about that. Gas is used in some clothes dryers, and propane is also a popular fuel choice. In a zero-carbon- emissions world, they must go.

The advocates of these pie-in-the-sky energy transformation promises, either at the federal level or here in Richmond, never own up to the consumer costs. They shy away from discussing how much that Transportation and Climate Initiative will tax motor fuels, how much the Regional Greenhouse Gas Initiative is going to add to electric bills, and the massive capital expense behind the Virginia Clean Economy Act.

No Virginia locality has been proposing this, but elsewhere (California, Washington) it has been adopted by local governments. The issue is also active in three of the Regional Greenhouse Gas Initiative states in the Northeast. Virginia, now a RGGI state, cannot be far behind.

Nineteen U.S. states have passed a ban on these bans, prohibiting such local ordinances, according to an S&P Global article. The map used as illustration above shows them. A recent Wall Street Journal article discussed how California restaurant chefs are fighting to keep their gas stoves.

In Great Britain it is a national effort, with the government pushing to replace 600,000 gas and oil boilers per year by 2028, but anti-CO2 activists are pushing for 900,000, according to an article in The Telegraph cited by the website wattsupwiththat.com. There people are waking up to the billions of pounds it will cost.

Maybe you will wake up when you get the order to rip out the gas furnace and buy a heat pump. Or when your old water heater dies, and you are told you cannot use gas or propane anymore but must go electric. “Who says so?” you will yell, and you will learn the foundation was laid by the Virginia General Assembly in 2020 and 2021. (“…net-zero emission by 2045 in all sectors, including the electric power, transportation, industrial, agricultural, building, and infrastructure…”)

One candidate for Governor this year is promising to accelerate the transformation schedules already on the books. Guess which.

The CEA analysis also taps into Princeton University’s Net Zero America data on what this planned energy transformation will do to the transmission and distribution grids, also a cost which will come your way as consumers. The total national investment works out to $12,000 per household. Specific Virginia predictions from Princeton are on page 5 of the CEA report about Virginia.

If you doubt this will show up on your doorstep, remember that the Atlantic Coast Pipeline was crushed by Virginia opponents, a fairly minor capital upgrade proposed for existing pipelines in existing rights of way to serve Hampton Roads was killed, and the battle over the Mountain Valley Pipeline rages on. This is a war on fossil fuels, every single one you use in your daily life.

The future cost of the electricity that may soon be mandatory for your home appliances and personal car? That’s another story.

This entry was posted in Business and Economy, Economic development, Energy, Regulation and tagged Stephen D. Haner. Bookmark the permalink.