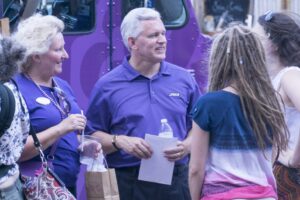 JMU isn’t often a leader or an innovator. Maybe it was in some ways when Ron Carrier was president. He could be bold to the point of brash and brash to the point of bullying. There were stories about him. There were fewer about his successor, Lin Rose, and none about the president in 2020, Jon Alger. A JMU communications official had once complained to a local newspaper editor about the difficulty of promoting the school with Alger at the helm, because Alger was seen as awkward and uninteresting.

Carrier ran the place for almost 30 years, during a period of explosive growth not just for JMU but for the poultry industry in the surrounding Shenandoah Valley. In the last quarter of the 20th Century, Harrisonburg went from a chicken town with a girls’ school to a major agricultural center with a still-growing regional university. Carrier grew the school, and Rose was there at the time, being groomed to succeed Carrier. After Rose, Alger seemed to come out of nowhere. The Board of Visitors had an under-the-radar search and chose him for reasons that were never clear.

His arrival in 2012 was part of the corporatization of the Central Shenandoah Valley in the early part of the century. The Daily News-Record, owned for more than a century by the Byrd family, inventors of Massive Resistance, was sold to a West Virginia firm; Rockingham Memorial Hospital became Sentara RMH; poultry companies that had been born and bred in the Valley were sold to conglomerates headquartered in the upper Midwest and Brazil; and JMU hired Alger.

Whether JMU’s COVID response would have been more successful had it been run by someone who knew the community better is open to debate. The failure of JMU’s approach isn’t.

One early warning sign was the reopening plan. The Governor’s Office provided a 9-page document listing the requirements for plans from the state’s colleges and universities. One of the first requisites was naming a coordinator or team. JMU’s team had 14 members, mostly mid-level administrators. That was in keeping with JMU’s structure of distributed responsibility. It was hard to say who was in charge. Put a cup of coffee in your car’s cup-holder and drive fast on a bumpy road. Find the highest point on the surface of the jostling coffee. If you could do that, you could figure out who was in charge of JMU’s COVID response.

JMU’s reopening plan was an administrative plan, not a public health plan, but when it was published on July 6, it met the state’s requirements. The Virginia Mercury two months later described a “regulatory void” in reviewing and evaluating the plans. SCHEV, the State Council on Higher Education for Virginia, reviewed the plans to make sure that all 26 required sections appeared. But apparently no one checked to see what those sections said. The point seemed to be whether the plans existed, not whether they worked.

Much was troubling about the plan, and some parts were almost comical. The plan protested, if not too much, at least too many times about its commitment to student and community health and well-being: 12 mentions of “health and safety” and three of “health and well-being.” A careful editor would have reduced that to maybe two each. But as to how it would carry out that commitment, two things stuck out: traffic plans and closing criteria.

Foot traffic plans were to be developed for all buildings on campus, from the smallest converted cottage to the largest multi-classroom, multi-office building. The building managers developing the plans ranged from associate deans to departmental admins. Such a variety of planning and planners could work if there were a central coordinating authority reviewing the plans. There wasn’t. Plans varied from multi-page documents with diagrams to, in one case, a short email saying traffic should be one-way. The point seemed to be whether the plans existed, not whether they worked.

The JMU reopening plan sent to SCHEV referred to the establishment of traffic plans and the providing of signage in the past tense, even though neither was complete yet. Perhaps the assumption was that the process would be past tense by the time the plan was read.

“JMU is prepared for a partial or total campus closure at any point during the semester. If classes can no longer be held safely on campus, we plan to pivot to remote and online instruction, as we did successfully in Spring 2020.

Decisions regarding dismissals and shutdowns will be made in consultation with local and state public health officials. The university will communicate these decisions to the campus community as outlined in the established University Crisis Communications Plan, which was developed in collaboration with the Office of Public Safety and is detailed in Section D.4..”

The double period at the end was part of the original document, which was apparently not spell-checked for random typos or punctuation errors. The D.4 reference included another reference to a crisis communication plan addressing three phases of Response, Reassurance, and Recovery. It closed with a reference to the praise JMU’s communications had received from parents.

One could go through the entire plan in mind-numbing detail picking out these discrepancies, but no one did. Not at JMU, before sending it to SCHEV, and not at SCHEV, before approving it as the plan for addressing a health threat to 21,000 students and the surrounding community of 115,000 other people.

Although the numbers varied week to week, by mid-July it was apparent that as many as half of JMU’s students would return to campus from Virginia localities that were red zones or hotspots. These two terms showed up often in media reports: a hot spot was more than 1 new case per 1,000 of population over a two-week period; a red zone was the same number over one week. JMU’s population was about 21,000, and the city’s was estimated at 54,000, including the students at JMU and Eastern Mennonite University. Rockingham County was estimated at 82,000 and included a smaller number of students living in apartments on the edge of the city.

The students’ return came at a time when the city’s COVID cases were at a low point but when planning for the fall semester was already beginning for K-12 students in Harrisonburg and Rockingham County. The city and county school boards were fairly explicit that they were making their reopening plans based on whether JMU reopened in person, and whether that created a local surge in cases. (Multiple cases apparently come in outbreaks, clusters, and surges, depending on the number of cases and how much they can be shown to be connected. Very roughly, 12 people in a dorm is an outbreak, 24 people in the same set of dorms is a cluster, and some large increase in a geographical area is a surge.)

City and county school board discussions had to be open. That’s the Virginia Freedom of Information Act. FOIA, pronounced the way someone from Tidewater would say foyer. An ad hoc COVID communications committee put together by several local officials was exempt from FOIA. That committee included the mayor, JMU officials, a representative of the JMU president’s office, county officials, and even a member of the mayor’s reelection campaign. The factotum from Alger’s office and the campaign representative were the same person. It’s still a small town in many ways.

The factotum could, as many do, claim he was there in one capacity but not the other. I understand the temptation to a claim like that, but I’ve always been just one person, and when I occasionally make it into the news, I’m never sure how I’ll be identified: former mayor, former Democratic Party official, retired JMU employee. Same guy. Some younger folks don’t get that. A local school official who took a spokesperson’s role at a protest a couple of years back complained on Facebook that he was identified as a school official when he was there as a community activist. I thought he was joking at first.

Because Harrisonburg is still a small town in many ways, I heard gossip and some first-hand reports on what the communications committee was doing. It was not a decision-making body, but leaks and rumors from it were the closest the public came to hearing how various public bodies were interacting and coordinating their COIVD response. A delegate’s aide reportedly asked a city official if local schools could reopen if JMU didn’t. That was a serious business concern. Could employees work, or did they have to be home with the kids?

It was a legitimate question. There’s a difference between greed and economic necessity. That’s one of the nuances that was lost in some of the discussions about JMU reopening. Greed is Apple charging twenty bucks for a 3-foot cord that will break in three months. Economic necessity is JMU reopening because the loss of $30 million in dorm rentals would be catastrophic.

That money goes to salaries — not all of them inflated administrative paychecks — that local people spend at places that pay local taxes that fund police and schools. It’s not like the people in Alumnae Hall are spending it all on Vegas junkets. A study three years ago said JMU puts $480 million into the local economy, into a city-county community of about 136,000 people including students.

JMU’s Senior Leadership Team, for what it’s worth, takes home between $3.5 and $4 million in salaries. Ironically, in the summer and fall of 2020, one of the lowest of those salaries was the university spokesperson, who had to put a positive spin on some of the least defensible COVID decisions and was the public face of the school. The highest was Alger, silent but for his over-written emails. Nobody publicly accused him of hiding behind her skirts, although “skirt” did come up as a verb describing JMU’s FOIA compliance.

An example of the over-written emails is evident in a March 11 dispatch to faculty and staff announcing students wouldn’t return to campus after Spring Break.

JMU will not hold in-person classes the week of March 16. Beginning March 23, most JMU classes will move online until at least April 5. A communication will be issued by March 27 regarding the delivery of course content after April 5.

That critical information did not lead the email. There were 192 words before it, and 138 more before this: “While residence halls will reopen on March 15, students are encouraged not to return to JMU (including on-campus and off-campus housing) until at least April 5.”

Classes eventually went on-line for the rest of the semester, but the email mercifully didn’t. The clunky phrasing was characteristic of many of the school’s general emails, especially Alger’s. The Flesch scale of readability said you needed 17 years of education to easily read them. It didn’t say how much patience you needed.

A lot of folks on social media called JMU’s fall reopening an issue of greed. But none of the people preparing JMU’s reopening plans were getting rich off of them. They were just trying to keep the place running. They’re not bad people. They just didn’t have a good plan, but there was no way anyone could admit that.