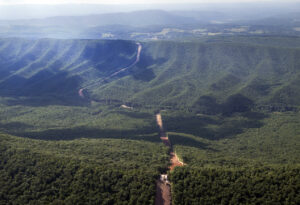 Breaking news: Dominion Energy and Duke Energy have announced the cancellation of the Atlantic Coast Pipeline, citing ongoing delays and increasing cost uncertainty. The cost of the project had escalated from $5 billion to $8 billion, and, despite winning a victory in the United States Supreme Court, the power companies still have no certainty of gaining all the needed regulatory approvals.

We regret that we will be unable to complete the Atlantic Coast Pipeline. For almost six years we have worked diligently and invested billions of dollars to complete the project and deliver the much-needed infrastructure to our customers and communities. Throughout we have engaged extensively with and incorporated feedback from local communities, labor and industrial leaders, government and permitting agencies, environmental interests and social justice organizations. … This announcement reflects the increasing legal uncertainty that overhangs large-scale energy and industrial infrastructure development in the United States. Until these issues are resolved, the ability to satisfy the country’s energy needs will be significantly challenged.

Bacon’s bottom line: I have mixed feelings. On the one hand, the cost of the project had escalated to the point where I could not see it becoming anything but a liability to rate payers. On the other hand, the fate of the ACP sends a signal that environmentalists have the power to block almost any project anywhere. The ACP was not a uniquely bad project. Environmentalist groups opposed to the use of fossil fuels of any kind, any where, under any circumstances, were endlessly creative in conjuring political objections — some having merit, some spurious, some thoroughly reprehensible — and using the courts to create endless delays.

Environmentalists now exercise an effective veto over almost every major energy infrastructure project. No corporation would be foolish enough to propose a project that conflicts with the extreme green agenda. The future now looks like energy-efficiency, solar farms, wind farms, and whatever cobbled-together back-up systems Dominion and Appalachian Power are allowed to build. Let’s hope the new green grid is robust enough to withstand hurricanes, polar vortexes and other extreme-weather events. Our lives literally depend on it.

This entry was posted in Energy, Environment, Money in politics and tagged Atlantic Coast Pipeline, Dominion, James A. Bacon. Bookmark the permalink.