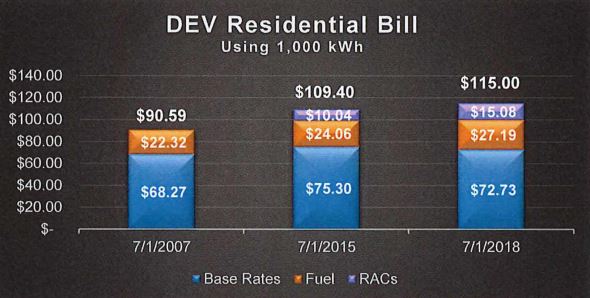 During 2017 Dominion Energy Virginia earned $365 million in profits above the target return on equity the State Corporation Commission would likely have established, but of course the General Assembly regulates the utility now – not the SCC.

For the year Dominion Energy’s profit margin on its Virginia operations was just under 14%, well above what probably would have been an allowed target of less than 10%.  On the generation side of the house the margin was more than 19%, which would make most other manufacturers ecstatic (and, yes, Dominion manufactures electricity).  The margin on transmission was right on target.

The figures come from the annual update the SCC provides to the General Assembly on utility regulation since the landmark 2007 return to regulation, which was followed by the unprecedented 2015 law that suspended rate regulation, only to lead to the 2018 revolutionary regulatory revisions only now taking full shape.  (The adjectives are intended to be sarcasm and fully reflect the opinion of the author.)

Yes, the instability borders on insane. The 2018 bill calls for a full SCC review of rates and profits, the first “rate case” since 2015, in 2021 and these excess profits will be part of that review (along with this year and the two following). Do not bet your retirement funds on that happening without further changes to the law.  But in the interim, instead of a rate case we get this report.

A similar report last year detailed large excess profits for 2015 and 2016, the first two years covered by the General Assembly’s suspension of SCC authority. A portion of those profits, $200 million, is being returned to ratepayers as rate credits in 2018 and 2019, a concession Dominion Energy offered for all the other good and valuable considerations in the 2018 bill.  You got the first portion on your bills in July.

The 2017 SCC report predicted that the excess profits would continue to roll in, and the new numbers fit that prediction. Under the regulatory scheme Dominion wrote for itself last winter, there remains a chance ratepayers could receive some of that excess back in refunds, potentially more than $200 million. But the new law gives the utility a pass on paying refunds if the money is instead invested in its coming grid capital program or certain favored renewable energy projects.

The state’s other investor-owned power company, Appalachian Power, also earned profits above the likely target, with a profit margin of 11.3 percent. Its excess earnings were estimated at $32 million but APCo has one-fifth the number of customers, so keep that in mind when making comparisons to Dominion.

The very chewy report goes into several other topics and includes an analysis (used before) of the increases in both Dominion and APCo rates broken down to specific parts of the bill.  In Dominion’s case, the growing number of itemized rate adjustment clauses (RACs) is driving up consumer costs, and the new legislation authorized a host of new ones. The excess profits discussed above are entirely earned in that first column, base rates, although profit margins also are baked into many of the RACs. 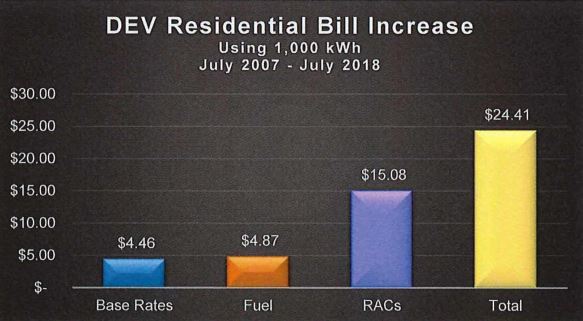 Dominion will tout that final result as proof Virginians should be fully satisfied with the job our legislators are doing by replacing the staid judicial regulatory scheme imposed by the SCC with the more hurly-burly process dominated by their large campaign donors (and Dominion is only one of them).

Parting shot: Excess profits of a third of a billion dollars a year do put those proposed $70 Micron grants in an interesting context.