Did the State Reduce the Rigor of Math SOLs? 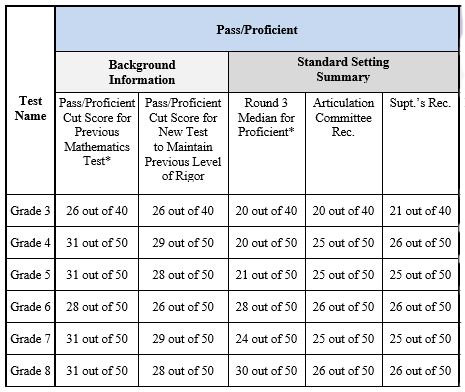 Last year the Virginia Board of Education (VBOE) approved new math tests for the Standards of Learning (SOLs) exams. Due to the change in content, educators had to evaluate how many questions students need to answer correctly in order to be counted as “pass proficient” or “pass advanced.”

This spring the school board voted to adopt math cut scores that were significantly lower than those initially recommended in the process. The VBOE in its March 2019 meeting led one board member to voice concern that the action would feed the public perception that the state was reducing the “rigor” of the test.

Said board Vice President Diane T. Atkinson: “I have a concern. … The distance between what would maintain previous rigor and where we are going is significant from my perspective.” The board had endured criticism previously when it eliminated some tests required for accreditation in order to focus on “deeper learning,” she said. “I am concerned this will add fodder to that conversation.”

The board’s action raises important questions, Atkinson said: Was the old test excessively rigorous? If not, will the new cut scores ensure that the new tests are as rigorous as the old tests? Or, she asked, “Are we going to send a message that we’re moving things back?”

The setting of standards for the new math test was an elaborate, multi-stage process. Teachers and curriculum content specialists for each grade convened to determine how many questions students are likely to answer correctly. Taking into account the concepts students need to master in order to succeed in the next grade, the 10- to 15-person teacher committees set “cut scores,” or minimum scores, for each grade. An “articulation” committee reviewed the “cut scores,” and then the state school superintendent weighed in with his own recommendations.

The first column in the table at the top of this post shows the number of questions in the old math tests in grades 3 through 8 that students had to answer correctly in order to achieve “pass/proficient” status. The next column shows the initial scores recommended by psychometricians with the state’s testing- assessment consultants to maintain rigor of the new tests. The other three columns show recommendations at various stages of the standards-setting process, including those of Superintendent James Lane, whose recommendations were approved by the board.

The 3rd grade math SOL poses 40 questions formatted for computer testing. The 4th – 8th grade tests pose 50 questions. Under the new board-approved standards, students can score pass/proficient even if they answer four to six fewer questions correctly than in the old test.

In contrast to the massive re-working of the “proficient” standards, changes to “advanced” standards were minimal.

Bacon’s bottom line: Atkinson is absolutely right: The board action should feed public worries that the state has reduced the rigor of the math SOLs. If no one is upset by the decision, that’s probably because the decision was never reported by the media, so no one knows about  it.

The big question is whether the relaxation of test standards was politically driven. The pass/proficient rate for math SOLs has been consistently lower than for other subjects in recent years. The low pass rate is an embarrassment to many school administrators and a threat to the accreditation of many schools. Feeding the suspicion that the process was driven by politics is the fact that the board made so few changes to the pass/advanced cut scores. While high pass/advanced scores are desirable, lower scores do not threaten school accreditation and cause the political heartburn that low pass/proficient scores do.

Here’s the danger: If the VBOE relaxed standards excessively, students, parents, teachers, and administrators will get an unrealistic view of student achievement. Students could advance into higher grades unprepared to master more advanced mathematical concepts, and failing schools could escape accountability.