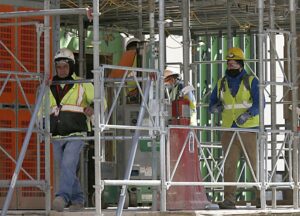 Many commenters on this blog seem to view Virginia Democrats as elitists (the “Plantation Elite”) who either ignore or look down on the needs of most Virginians or elitists who are absorbed in advancing critical race theory and other woke ideas. While battles against these perceived threats have been raging on Bacon’s Rebellion, Democrats in the General Assembly have passed, over stiff Republican opposition, a raft of legislation during the past two sessions that benefit ordinary working stiffs.

Some of this legislation has been high profile and has drawn fire on these pages, but most have gone largely unnoticed here and in the press. The best-known bills are those that increase the minimum wage and that authorize localities to engage in collective bargaining with their employees. These have been debated extensively on BR and I have no interest in resuming those debates here. (For the record, I support the minimum wage increase, but have strong reservations about public employee collective bargaining.)

One legislative action that has symbolic importance, as well as substantive effect, is the creation of the position of Secretary of Labor in the Governor’s cabinet. Generally, I do not like the creation of secretariats with only one or two major agencies to oversee, usually to appeal to a special political constituency. Examples would be the Secretary of Agriculture and Forestry and the Secretary of Veterans and Defense Affairs. The creation of a Secretary of Labor would be another such action. However, there is some legitimate reason for it. The agencies dealing with labor issues are now buried in the Commerce and Trade secretariat, which has a heavy emphasis on economic development. Issues related to the workforce are likely to take a back seat. Furthermore, the Commonwealth has a fractured workforce development infrastructure. A Secretary of Labor could serve to coordinate those efforts better.

In addition to legislative initiatives, the Northam administration has taken aggressive action on complaints of misclassification of workers on state construction projects. As reported by the Richmond Times-Dispatch, the Virginia Employment Commission, after an extensive investigation, has found that dozens of workers have been misclassified as independent contractors by firms working on the construction of the new General Assembly Building.

In addition to the bills passed (noted below), the legislature included language in the new Appropriation Act establishing a working group to “examine the procurement, wage theft, worker misclassification, and prevailing wage laws” relating to state construction projects. Other language directs Cabinet Secretaries to take steps to protect workers on state construction contracts.

Finally, Attorney General Mark Herring announced the establishment of a Worker Protection Unit within his office that “will focus on investigating, stopping, and prosecuting exploitation of Virginia workers.”

In reaction to all these developments, Frank Mahoney, spokesman for the Eastern Atlantic States Regional Council of Carpenters, sounded almost giddy. “It’s a great time for workers’ rights in Virginia. It seems like things are going in the right direction.”

Listed below are short summaries of the bills passed in the 2020 and 2021 sessions that expand protections for workers. The vote in each house is also shown. With a couple of exceptions, the bills were enacted over strong Republican opposition, with most passing on a straight party-line vote. Democrats are likely to try to exploit their support for, and Republican opposition to, workers in the upcoming fall elections.

Secretary of Labor. HB 2321 (2021) creates the position of Secretary of Labor in the Governor’s cabinet.  The secretariat will consist of the Department of Labor and Industry, the Department of Professional  and Occupational Regulation, and the Virginia Employment Commission, all of which are currently under the Secretary of Commerce and Trade.  The bill abolishes the position of Chief Workforce  Development Officer.  (54-44; 21-18)

The provisions apply to the state government and all local and regional governments.

The bills eliminate the following current exemptions to the minimum wage requirements:

Other wage-related issues. Non-payment of wages—Current law sets out various procedures employers must follow in paying their employees. Legislation enacted would prohibit an employer from firing or discriminating against any employee because that employee filed a complaint with the Commissioner of Labor and Industry regarding nonpayment of wages in accordance with provisions of the Code. Furthermore, if, during the investigation of a complaint, the Commissioner runs across evidence that other employees were not paid in accordance with Code procedures, the Commissioner may investigate those cases as well  Finally, employees are authorized to file a civil suit against any employer violating the Code provisions relating to the payment of wages. The civil suit can be used to recover wages and the court shall award an additional equal amount of liquidated damages and attorney fees. If the court finds that the employer knowingly failed to pay wages in accordance with the Code provisions, the court shall award triple damages. (HB 336, HB 337, SB 48, and SB 49 (2020)) (85-13; 40-0);  (SB 838 (civil action) (2020) , 52-45-1; 22-18)

Prevailing wage—HB 833 and SB 8 (2020) require that any contractor for a state construction project pay at least the prevailing wage for the general area as determined by the U.S. Secretary of Labor under the Davis-Bacon Act.  (55-44; 21-19)

Overtime and paid sick leave. HB 2137 (2021)—Requires that employers provide home health workers, who work at least 20 hours per week or 90 hours per month, with paid sick leave, to be earned at a minimum rate of one hour for every 30 hours worked. (54-46; 21-18)  This bill was a compromise from the 2020 bill that failed which covered all public and private employers with six or more workers.

This entry was posted in Business and Economy, General Assembly, Labor & workforce and tagged Dick Hall-Sizemore. Bookmark the permalink.