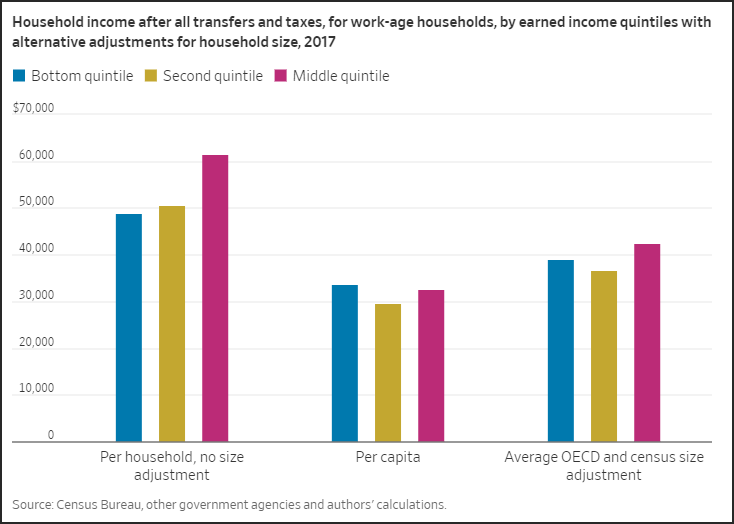 If you want to understand the political realignment taking place in the United States — and Virginia, of course — you need to read this column in The Wall Street Journal: “Income Equality, Not Inequality, Is the Problem.”

Most commentary on income inequality in the U.S. focuses on income reported to the Internal Revenue Service. It does not adjust for income taxes, welfare benefits, or household size. Once those adjustments are made, Phil Gramm and John Early contend, income differences between Americans in the bottom income quintile and the second from bottom disappear. Indeed, bottom-quintile households make slightly more disposable income than second-quintile households, and almost as much as middle-quintile households.

Actually, the situation is probably worse than Gramm and Early portray. Their adjustments include only “income transfers” — they apparently do not include a vast array of means-tested benefits like those we see in Virginia: electricity rebates for the poor, eviction moratoria, free transit fares, and college scholarships and loans. Nor do they include black market income, which some economists estimate to account for 10% of the economy.

As the sub-head of the article summarizes the picture: “Those in the middle work much harder, but don’t earn much more, than those at the bottom.”

About a year ago, I suggested that the great divide in America is between middle-class “working people” on the one hand and educated elites and the “marginalized” people who benefit from the elite’s compassion. I cited a TikTok commentary by a certain Rhonda Lee Hughes Griffin:

I’m guessing Griffin has worked pretty hard all her life. And I’m guessing that she has a very different view than our virtue-signaling elites do about the people in the bottom quintile. Far from viewing them as victims of anonymous “structural” forces, people like Hughes draw a direct line between peoples’ personal choices and their lot in life. They have encountered a lot of loafers, free riders and cheaters, and they’ve seen people who collect government benefits while working side hustles and taking cash under the table. They’ve seen their share of irresponsible behavior by nephews, in-laws or people living down the street, partying too hard, having babies, saving too little, and crying poverty when they lose their jobs.

Now people like Hughes, whom I’m guessing does not have a college degree (I apologize if I’m mistaken), are treated to the multimillion-dollar magnanimity of President Joe Biden toward members of the educational elite who find themselves unable to pay back their college loans.

No wonder working people feel the system is stacked in favor of the educated elites and their wards, the poor. Unlike the rich, whom they can only read about in magazines, they see the members of the bottom quintile in action all around them. They see first-hand the abuses that occur.

“While official statistics don’t count two-thirds of those transfer payments and don’t show the income equality they produce, Americans who work hard to make ends meet are aware of it,” Gramm and Early write. “The hostility of working people is increasingly focused on a system where those who don’t break a sweat are about as well off as they are.”

Adding fuel to this combustible mix is the undisguised contempt that the educated elites display toward “working people” even as they make endless excuses for the dysfunctional behavior of the poor. Working people are “deplorables” and bitter people who “cling to guns or religion or antipathy toward people who aren’t like them.” Educated elites are assaulting the traditional values of working people in schools and popular culture and proclaiming them bigots and ignoramuses in the bargain. When boys can be girls, and girls can be boys, when obscenity is permitted in school libraries but classics like Huck Finn are banned, when values like hard work, thrift and punctuality are denounced as “Whiteness,” it’s no surprise that working people feel as if their way of life is under assault.

Gramm and Early don’t touch upon the culture wars, preferring to focus on the income equality between working people and denizens of the bottom income quintile. “This justifiable resentment is the economic source of today’s American populations,” they write. “It is ravaging the increasingly unstable Democratic political alliance between welfare recipients and blue-collar workers. … It is now driving political realignment among Hispanic voters, who are disproportionately middle-income earners.”

Combine the two — unearned income equality with the culture wars — and you get the polarized politics of the 2020s.

This entry was posted in Poverty & income gap and tagged James A. Bacon. Bookmark the permalink.