Climate Suit Against Virginia Would Lose at Trial 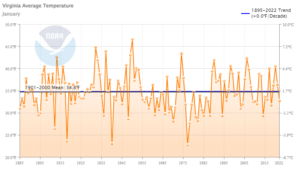 Less than one month after taking office, Virginia Governor Glenn Youngkin (R) and other state officials are being sued by thirteen school-age defendants who claim the state’s long history of permitting the use of fossil fuels for various purposes is causing a climate crisis and harms them directly.

The petition in the Circuit Court of the City of Richmond was filed last week and first reported by the Virginia Mercury. The development should be widely welcomed, and rather than seeking dismissal on procedural grounds, the state should mount an affirmative defense. It is time to put the climate crisis science deniers on the stand for vigorous cross examination under oath.

The plaintiffs are the science deniers? In a replay of the famous 1925 Scopes evolution trial, the climate catastrophe crowd would be the fundamentalists leaning on revealed truth and popular consensus rather than logic and evidence? Yes.

Exhibit A for the state’s defense was recently provided by a group of distinguished experts (no question about these credentials) in a report compiled by a group called the CO2 Coalition. They examine Virginia data where available and find few signs the state is seeing any significant changes to its climate, and zero evidence that fossil fuel use has produced a crisis in any form.

The plaintiffs are quite specific in their claims, all of which they now must prove in a court of law subject to discovery, interrogatories and sworn testimony under penalty of perjury.

The climate crisis, which Defendants’ permitting of fossil fuel infrastructure causes and contributes to, is already having profound impacts in Virginia and is causing grave harm to these Youth Plaintiffs. Increasing temperatures, sea level rise, more frequent and destructive extreme weather events, and increased incidences of vector-borne illnesses are among the climate impacts imperiling these children. Plaintiffs are experiencing significant physical and mental health injuries, significant damage to their homes and personal property…

The CO2 Coalition report doesn’t address “vector-borne illnesses,” but touches on most of those other claims.  The following points are from the opening summary on the report:

The battle of the expert witnesses on those points under oath would be quite a teaching moment. It would also be nice to drag into court for a deposition some of the others in positions of influence who peddle pseudo-science in the popular media, most often baked into the weather reports in print and broadcast.

“Coldest January on Record since 2018 but Dramatic Cold is Becoming Less Frequent” spouts a recent Richmond Times-Dispatch headline. The story by former professional climate propagandist Sean Sublette included the chart reproduced above. There is no indication of significant climate change in that chart, yet it is offered as proof of such.

Do those 13 plaintiffs really claim severe damage to their young lives because the low temperatures are a couple of degrees higher? Another data point ignored by the alarmists but which must be brought to the court’s attention is that cold kills more humans than heat.

The pending suit seeks only a declaratory judgement on various points, plus costs and “further relief as may be just and proper.” They are suing for show, not for dough. They should get the show.

The petition raises the most important questions of our time, as most of the western world’s economies are doing the same as Virginia, rapidly replacing cheap, reliable fossil fuels with unreliable and expensive wind and solar generation. The geopolitical ramifications are playing out in Ukraine today. Why not use a Virginia courtroom to ask if the entire premise is false?

This entry was posted in Business and Economy, Energy, Environment, Regulation and tagged Stephen D. Haner. Bookmark the permalink.