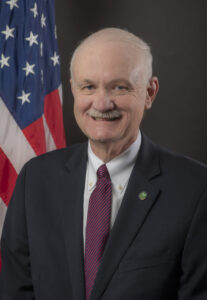 One of the nay votes came from Mark Christie, formerly a member of Virginia’s State Corporation Commission and not one for pulling punches.  His dissent and complaint that this new policy “is the mother of all legal weapons” made several of the news reports.

For the interested Bacon’s Rebellion reader, below find parts of his remarks from the bench summarizing the longer dissent.  Any emphasis noted in the text was his:

What the majority does today is essentially assume it has the power to rewrite both the Natural Gas Act (NGA) and the National Environmental Policy Act (NEPA), but that is a power that we do not have; only the elected legislators in Congress have that power and they have not delegated it to us.

And the result, especially the greenhouse gas policy that purports to address climate change, is such a confusing mess of a policy that the majority sticks an “interim” label on it. But don’t be fooled by the “interim” label. This new policy – confusing as it is – applies right now, not only to new applications, but to all pending applications, and it will inflict material harm on all pending applications right now. Changing the rules in the middle of the game violates any serious principle of due process, regulatory certainty, and just basic fairness.

First is the narrative that the courts are “telling us to do this.” This claim rests almost entirely on one case from the D.C. Circuit, Sabal Trail, but since Sabal Trail there have been more recent opinions from the U.S. Supreme Court itself reasserting its major questions doctrine. And the major questions doctrine holds that under the Constitution, major issues of public policy are reserved to Congress, so unless Congress has made an explicit grant of authority by law directing an agency to address a major policy issue, the agency cannot simply assume it has the power.

And whether this Commission can reject a certificate to build a natural gas facility, one that otherwise meets the criteria for approval under the Natural Gas Act, because of its alleged impact on global climate change, is clearly a major question of public policy. I cannot think of a more important question of policy – not just energy policy, but economic policy, and yes, even national security policy…

Now the second false narrative is that this new policy is necessary to give “legal durability” to the certificates we do approve. Seriously? Claiming this new policy will make our certificate orders more durable on appeal is positively Orwellian.

Preventing the construction of any new natural gas project is the overt public-policy goal of many interest groups who are conducting a national campaign of legal warfare – “lawfare,” for short – against every single natural gas project. There is no doubt about that campaign. And today’s new policy, whatever the intent, will have the undeniable effect of advancing that policy goal.

So, rather than bringing legal durability to our certificate orders, today’s new policy will undoubtedly increase the costs and uncertainties associated with pursuing natural gas projects, both here at this Commission during certificate proceedings, but even more so on appeal. And since we know that every certificate to build a natural gas project is going to be fought in every forum, both in appellate courts and other permitting agencies, this new policy opens up a broad array of new avenues to attack every certificate this Commission approves.

Now last month in the Adelphia case I said the Commission’s new rule allowing unlimited late interventions in certificate cases was “not a legal standard, but a legal weapon.” Well, this new certificate policy approved today is the mother of all legal weapons. And there is no question that it will be wielded against every single natural gas project, making the costs and uncertainties of even pursuing a project exponentially more daunting.

Now we already know that a dependable natural gas supply is essential here at home for a reliable electric grid, to heat homes and support jobs, especially manufacturing jobs. But literally at this very moment events in Europe and Ukraine graphically illustrate that domestic gas supply is also essential to our very national security.

Finally, this debate over how climate impacts should be handled in certificate cases, is really over a public policy question, one with huge implications for millions of Americans.

I happen to agree that reducing carbon emissions that impact the climate is a compelling policy goal. But the Commission does not have an open-ended license under the U.S. Constitution or the NGA to address climate change or any other problem the majority may wish to address.

Now, to those who say “well, times have changed and Congress was not thinking about climate change when it passed the NGA, but that’s a pressing need now so FERC should address it,” here’s an inconvenient truth: If Congress wants to change the Commission’s mission under the NGA it has that power; FERC does not.

Let me emphasize every person and organization pursuing the policy goal of banning the use of natural gas has a right under the First Amendment to advocate for that policy. However, a policy to block the construction of every natural gas project is a public policy question of immense importance, one that affects the lives and livelihoods of tens of millions of Americans and their communities. In a democracy, such a huge policy question should only be decided by legislators chosen by the people, not by unelected administrative agencies.

So the real debate over the use of GHG climate impact analyses in our certificate proceedings is far more about public policy than it is about law, and ultimately comes down to these questions: Who makes major decisions of public policy in our constitutional system? Who decides?

And in our democracy, it is the elected legislators who have the exclusive power to decide the major policy questions that impact the lives of millions of Americans, such as a policy responding to climate change…

Haner’s final word:  Across the pond, a murderous dictator is using his natural gas as a geopolitical weapon of aggression. Here, we disarm.

This entry was posted in Business and Economy, Energy, Environment, Regulation and tagged Stephen D. Haner. Bookmark the permalink.