Catholic Bashing No Disqualification for Northam? 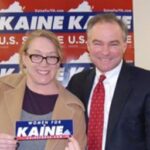 Try this thought experiment. Imagine a headline in the state capitol newspaper reading: “Appointee’s posts disparage Republicans and others on the web.” Or swap Democrats for Republicans.  Would anybody bat an eye?

Instead, of course, the story in the Richmond Times Dispatch is about Governor Ralph Northam’s recent appointment of a vicious Catholic-hating Democratic activist from Alexandria to the Virginia Council on Women. If her appointment is not withdrawn and her rhetoric not repudiated by first Mass on Sunday morning, shame on Governor Northam.

Whoever vetted the appointment should go with her. If reporter Patrick Wilson found all his examples, or they were fed to him within a short time, there no excuse for the Secretary of the Commonwealth missing them. One must assume the office did not. This should blow up into as large a blot on Northam’s record as the yearbook photo and his dithering responses, some of which must have been lies.

Let’s see what happens. I’m not betting this makes the New York Times or the NBC Nightly News, where it should be prominently reported, followed by mirror and navel gazing all around. Check out the photo easily found on line. Clearly most Democrats are not offended by her rhetoric, not even if they themselves are Catholic. I bet she survives.

Because, seriously, would anybody’s appointment be in jeopardy if the on-line insults had been hurled at the other political party, especially the extreme ends of those parties? No. That’s how bad political discourse has gotten nationally, and now in Virginia. As I was going through her attacks, I recalled plenty of similar examples from plenty of political blogs.

Would anybody be disqualified for a Democratic appointment by directing “F-ck off and die” to Corey Stewart or even President Trump, as she did to a Catholic author? Would the Trump Administration reject somebody who is using that rhetoric toward Antifa activists or illegal immigrants or the chair of an investigating committee? Not when the President himself is down in that behavioral basement.

This is only a story because she says and writes these things about Catholics and the Catholic Church. If the same insults were hurled at Islam, the response might be, no problem, when can you start in the job? The insults are not acceptable hurled at anyone. As the downward spiral continues, we either speak up or share the blame. Dump her, Governor.

This entry was posted in Culture wars, Politics and tagged Stephen D. Haner. Bookmark the permalink.