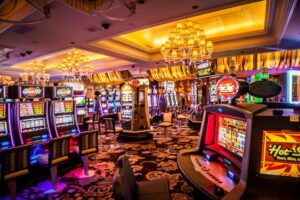 “I thought you were a libertarian,” a friend of mine said accusingly last week. “So why would you vote against casino gambling if you lived in Norfolk?”

I’m not against gambling, I explained. I just don’t want it in my backyard. There’s no benefit to society. Plus, it brings sleazy activity, crime and poverty to places that legalize it.

Gambling almost never lives up to the hype.

Last winter the General Assembly approved casino gambling for Virginia and allowed five “economically disadvantaged” cities; Norfolk, Portsmouth, Danville, Richmond and Bristol to hold referendums on the matter. Four of the cities vote next week. Richmond is holding off for a year.

What this means is that cities with more than their share of poor people will get casinos. I’m not sure that will work out the way the politicians think it will.

Notice that three of the five locations are spaced out over the state. But two will be cheek to cheek here in Tidewater.

Yes, yes, I know. Norfolk’s proposed casino will be built beside Harbor Park by the Pamunkey Indian Tribe and they will supposedly spend $500 million on a luxurious casino with a 500-room hotel. Oh, and Norfolk will be swimming in money as a result of all the tuxedo-clad high rollers who will jet into town.

Of course, Portsmouth is also being asked to approve a smaller, $330 million project that will be run by a Chicago outfit called Rush Street Gaming .

If both projects are approved. Both are likely to be slimmed down.

Pay attention to the small print.

Instead of getting a glitzy casino like Las Vegas’ Bellagio, Tidewater could wind up with something more akin to the dreary riverboat gambling outposts along the Mississippi or the slots slums of Dover.

Heavy on one-armed bandits and video poker. Light on table games and big spenders. The sort of joints that bus in seniors and give them each a voucher for the all-you-can-eat buffet to fortify them as they blow through their Social Security checks.

Before voting, it’s worth reading this piece, “Atlantic City: The Fall of the Boardwalk Empire,” from The American Prospect. It examines the promise of casinos in Atlantic City and their ugly reality .

New Jersey voters approved casino gambling in the 1976 and the first casino opened in 1978.

Four decades ago, Atlantic City rolled the dice on the city’s future-and lost. In 1976, visions of dollars sloshing into municipal and state coffers lured New Jersey voters into establishing casino gambling into Atlantic City. It was the ultimate Faustian bargain: Gambling industry investments would save the fading grand dame of the Jersey Shore.

Voters approved casinos in a statewide referendum, after initially rejecting them, amid considerable industry hype. The gambling industry would provide jobs and send money back into the community that had been in a steady decline after World War II — that was the theory, anyway.

Sound familiar? This wouldn’t be the first time Norfolk voters were blinded by a shiny object. Look at the disaster of light rail. And MacArthur Center, which now has tumbleweeds blowing inside.

I drank the Kool-Aid,” says Frank Nero, former New Jersey economic development official who was the mayor of the northern New Jersey town North Plainfield at the time. Atlantic City had the only casinos outside Las Vegas; it also had unemployment, crime, and decaying neighborhoods. “Casinos promised economic renewal,” Nero says.

But that rosy scenario never materialized.

Indeed, it didn’t. In the four decades since casinos came to town Atlantic City’s crime rate has risen, graduation rates have fallen and the city — outside out of the casino area — is more impoverished than it ever was.

The casino industry’s business model – to drain dollars as quickly as possible from the pockets of people who, for the most part, can least afford to lose them – meant that residents had less to spend on local businesses and communities, which suffered in turn.

That’s the rub, of course. Every dollar that locals drop in whatever passes for a casino in Norfolk or Portsmouth is a dollar that won’t be spent in a local restaurant or movie theater. Plus, several studies have shown an increase in street crime with the arrival of casinos.

Muggings, that’s something they forgot to warn us about.

OK, maybe casino gambling will turn Norfolk and Portsmouth into Monte Carlo of the East Coast.

But it’s more likely that after the initial excitement wears off the projects will bring little more than low-paying jobs and new social problems to cities that are already struggling.

This entry was posted in Business and Economy and tagged Kerry Dougherty. Bookmark the permalink.