Buckle Your Seatbelts, HUFs and MBUFs Are Coming 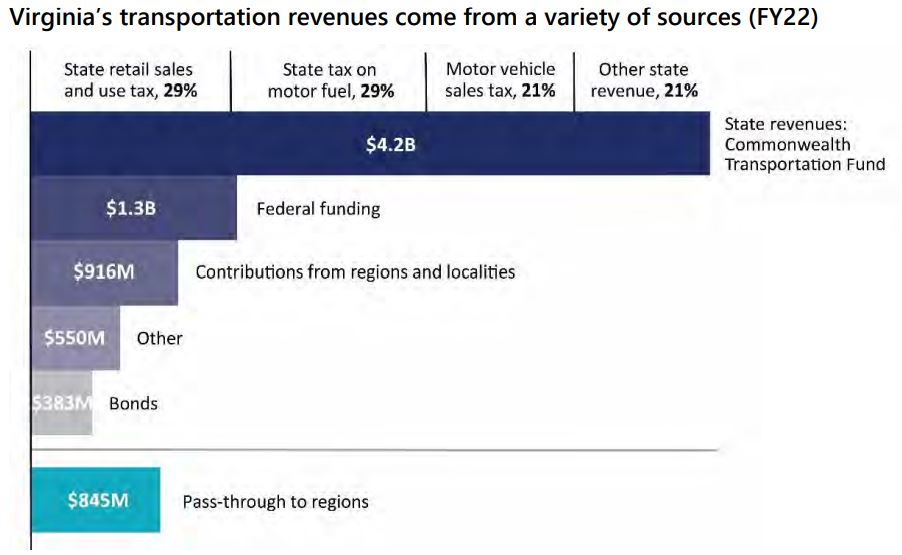 For once, Virginia’s Virginia’s $8 billion-a-year surface transportation system (roads, highways, bridges, mass transit) is not in crisis. The system is in pretty good shape, and it is well financed, concludes a new Joint Legislative Audit and Review Commission (JLARC) report.

Recent tax increases bringing in more than $800 million a year ensure that Virginia will have the resources in the near- to mid-term future to make needed improvements. But longer term, the evolution of Virginia’s automobile fleet from gasoline-combustion engines to hybrid and electric vehicles will undermine a transportation-funding system which generates 29% of its revenue from taxes on gasoline and diesel fuel.

The solution is moving to a Highway User Fee (HUF) — first a flat fee, and then a Mileage Based User Fee (MBUF) based upon the number of in-state vehicle miles driven, the report says. But to build public acceptance for a mileage-based fee Virginia should act now to address privacy concerns and evaluate the cost of administering the fee, JLARC says.

As the commonwealth begins implementing the user fees, Virginians will be hearing more about HUFs and MBUFs in the very future. Only two other states have established permanent MBUF programs, and they have only a few thousand participants. Virginia’s program is more ambitious. As the JLARC study says, “Virginia’s MBUF is being modeled on the Oregon and Utah programs but will likely begin as a much larger program.” JLARC expects at least 2.6 million Virginians (38% of vehicle owners) will be charged user fees in the next two years.

The user fees will be voluntary early on as the state works out the kinks of setting them up. But they could well become a full substitute for paying diesel and gasoline taxes.

But the problems seem manageable. In 2019 and 2020, the General Assembly raised truck fees and diesel taxes, collecting significantly more in revenue from commercial trucks. It also boosted the fuel tax rate by 10 cents per gallon over two years, and the diesel rate by seven cents, and indexed both for inflation. Those changes, when combined with an increased in motor vehicle sales, yielded $578 million (16% more) in annual state revenues. Additionally, the implementation of regional taxes is expected to net another $300 million for regional projects.

Because fuel taxes are now indexed for inflation, higher taxes per gallon are expected to offset the anticipated slide in the number of gallons sold as cars become more fuel efficient or consume no gas at all. Any revenue projections are fraught with uncertainty, however, as it is unknown how rapidly Americans will shift from gas-powered cars to electric vehicles.

HUFs and MBUFs. Looking toward an EV future, Virginia implemented a flat Highway User Fee to raise money from vehicles that don’t contribute to the tax base by paying gasoline taxes. User fees generated $43 million in FY 2021. That’s just the beginning. Says JLARC:

Virginia is currently establishing a voluntary MBUF program, and a second or third generation of this program could one day expand to enroll all Virginia vehicle owners. For example, using reasonable assumptions about taxable miles, charging two cents per mile through an MBUF in the future could theoretically generate about $1.2 billion to $1.4 billion in annual revenue (approximately the same amount of state motor fuels tax Virginia collects.

The Department of Motor Vehicles will oversee the MBUF program, but it will mostly be administered by a private company. In the roll-out phase participation will be optional, and drivers can choose whether or not to use metering equipment that tracks driver location. DMV may limit the number of participants in the early years of the program.

Getting the public’s buy-in will require addressing issues surrounding data privacy — in particular location tracking. Location tracking is necessary if drivers don’t want to pay taxes on miles they drive outside Virginia.

The program should give users the option to report mileage without location tracking and restrict how participant data can be collected, used, disclosed, and retained. For example, legislation should limit the collection of participant data to only what is necessary for program administration, require that there be a reasonable period after which program data is destroyed, prevent disclosure of disaggregated data, and require any research uses of aggregated data to be approved by an institutional review board (IRB).

Meanwhile, JLARC recommends, DMV also should begin evaluating the administrative and operational costs of the program